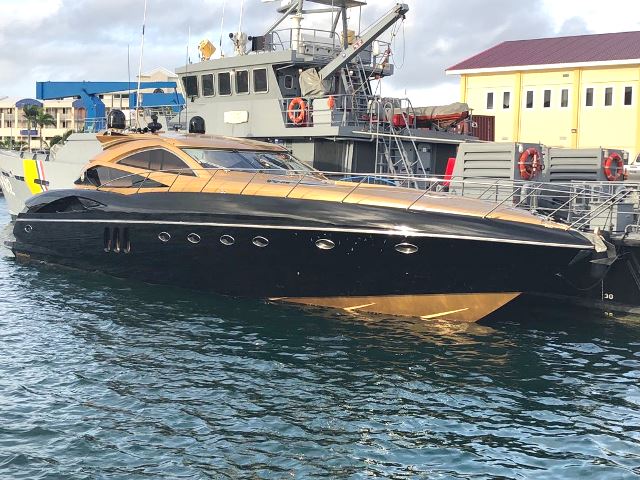 PHILIPSBURG, Sint Maarten — On Tuesday August 21, the Anti-corruption Taskforce (TBO) Mr. O.A. born in Sint Maarten on 28-10-1981, was detained and taken into custody. He is suspected of intentionally removing the luxury yacht “Jefe” of the seizure made by the Public Prosecutor’s Office on July 11 in St. Maarten. The owner of this yacht, Mr. O.A. is one of the suspects in the “Emerald” case. By means of seizure and sale of this yacht, the Public Prosecutor’s Office is trying to recover part of the profits O.A. gained through criminal activity.

The vessel was in the scaffoldings at Bobby’s Marina at the time of seizure and it was not allowed to be moved or launched into the water. On Sunday, July 22 however, during an inspection of the Coast Guard at Bobby’s Marina, the boat was no longer present. A search of the area yielded nothing. Further investigation showed that the vessel had sailed earlier that day to Anguilla. The Coast Guard at the request of the Public Prosecutor’s Office, went to Anguilla to retrieve the yacht and towed it to the Coastguard substation in Sint Maarten. Once again the vessel is seized.

A maximum imprisonment of four years can be imposed on the withdrawal of goods that have previously been seized.

One of the main tasks of the Anti-corruption Taskforce is to fight corruption. The deprivation of criminally obtained assets is also one of its tasks.