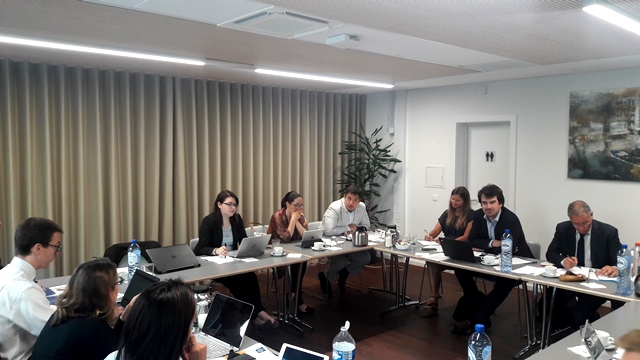 PHILIPSBURG, Sint Maarten — Tuesday July 17 the EU representative for Sint Maarten, Mrs. Carol Voges, chaired an ad hoc Executive Committee meeting of the Overseas Countries and Territories Association (OCTA). The objective of the meeting was to initiate discussions with the OCTA membership on the future of the association post Brexit. The majority of OCTA’s current membership consists of British Overseas Territories. Their exit will prompt an array of operational and strategic constraints for the association.

Consequently, the existing articles of association were reviewed and the possibilities for cooperation with the British Overseas Territories with respect to regional programming, diplomacy and lobbying after March 29, 2019 were thoroughly debated. Significant to note is that the majority of these territories are located in the Caribbean region. Examples are Anguilla, the British Virgin Islands and Montserrat, therefore preserving our ties with these territories post Brexit remains of paramount importance.

In preparation of the upcoming Ministerial conference in early 2019, the decision was made by the Executive Committee to commission a legal consultant to advice as to the various options available for the continued partnership with the British Overseas Territories.

Additionally, on May 2, 2018 the European Commission published as part of the Multiannual Financial Framework for the period 2021-2027, their proposal for a budgetized Overseas Countries and Territories (OCT) specific financial instrument, which will exclude the British Overseas Territories. In order to commence the discussions with the Member States linked to the Overseas Countries and Territories, Sint Maarten’s EU representative chaired a workshop which comprising of representatives from France, The Netherlands, Denmark and various OCT representatives.

OCTA informed the Member States that in early August, it would be publishing its position on the new Overseas Association Decision (OAD). The OAD being in essence the legislative framework that outlines the OCTs relationship with the European Union.

Moreover, during the meeting both the Member States and OCTs present shared their perspectives on the proposed new OAD and OCT financial instrument. The future level of funding, access of OCTs to union programmes and increased flexibility for OCTs with respect to their individual programming, as well as cooperation with non-OCTs were the main points of discussion.

In closing, the Member States shared with the OCTs the institutional timeline of meetings which they will be attending to negotiate the terms of the European Commission’s proposals. The Member States present assured the OCTs that they would do their upmost to champion, wherever possible, the position of the OCTs during the forthcoming negotiations. A follow-up meeting between the three Member States and the OCTs has been scheduled for mid-September.