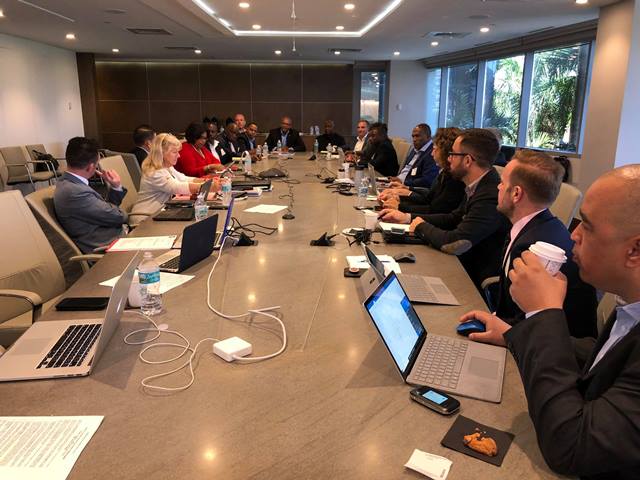 The destinations form a critical part of the Eastern Caribbean cruises and together must showcase that the countries have recovered well from the hurricanes in 2017, and are now open for business.  Based on the aforementioned, Port St. Maarten and the FCCA initiated a destinations think tank that would continue to bring this message forward about best practices, lessons learned, and developing a sustainable future together.

“Destinations in the Eastern Caribbean are all in the same boat together.  Should more than two destinations on the cruise itinerary not be up to par, this can directly affect cruise calls to St. Maarten.

“We all have a mutual beneficial interests in each other’s welfare where cruise tourism is concerned. We have to ensure our cruise passenger facilities services and experiences are ready in order to keep the demand high for the Eastern Caribbean.

“There is not one cruise that only comes to St. Maarten, and therefore we must all recover together in the right manner.  From a local perspective, that is why the South and North sides of the island signed a Memorandum of Understanding where destination promotion is concerned; one cannot do without the other.  This same philosophy and approach also applies for Eastern Caribbean cruise destinations,” Acting Minister of Tourism & Economic Affairs Cornelius de Weever pointed out.

Several cruise lines communicated over the last two months that the demand for the Eastern Caribbean had softened.  Acting Minister of Tourism & Economic Affairs Cornelius de Weever said that St. Maarten has been doing well in terms of ratings post Irma, “However, we must continue to share the positive messages and photos from the Island across various social media platforms.

Minister De Weever further encouraged citizens to use the #stmaarten and #sxm social media handles with each great photo and videos they would put online of the Island buzzing with culture and entertainment.

The FCCA applauded the destinations for already welcoming tens of thousands of passengers since the hurricanes, and are excited looking at the upcoming cruise season.

The FCCA Operations Committee further mentioned that the platform is perfect to share lessons learned, best practices preparation for the upcoming hurricane season and to devise ways to improve to become better than ever.

Port St. Maarten Management praised the FCCA and Member Lines for the relief efforts and the continuous feedback, and reiterated the importance of citizens’ efforts.

Port St. Maarten’s Management, told how St. Maarten quickly enacted a strategy to gather both the private and public sectors to meet with a former cruise line executive to prepare for cruise passengers’ return, especially in terms of messaging to deliver, and focus on the silver lining of the catastrophe by finding ways to enhance offerings and rebuild even better than ever.

In all, the joint effort proved so proactive that the cruise line executives suggested holding similar meetings every quarter with the FCCA Operations Committee, which would further the efforts of the regular events the FCCA hosts throughout the year to bring together cruise executives and destination stakeholders with the goal of developing mutual success.

Created in 1972, the FCCA is a not-for-profit trade organization that provides a forum for discussion on tourism development, ports, safety, security, and other cruise industry issues and builds bilateral relationships with destinations’ private and public sectors. By fostering an understanding of the cruise industry and its operating practices, the FCCA works with governments, ports and private sector representatives to maximize cruise passenger, crew and cruise line spending, as well as enhance the destination experience and increase the amount of cruise passengers returning as stay-over visitors.

PHOTO CUTLINE: The Port St. Maarten delegation seated at the head of the table led by Acting Minister of Tourism & Economic Affairs Cornelius de Weever.  Also in the photo are members of the FCCA Operations Committee and representatives from the other islands in the Eastern Caribbean.