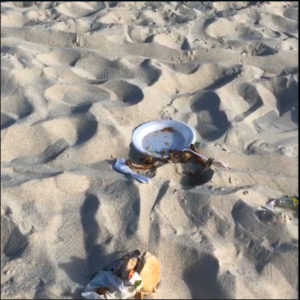 MULLET BAY, Sint Maarten — The Sint Maarten Nature Foundation, during its beach patrols, has noticed a significant amount of trash left behind by both residents and visitors after the Easter holidays.

This especially hurts since we were so busy to ensure that the beaches were clean after the hurricane for people to use and to see that trash is being left behind is unacceptable,” continued Bervoets.

The Nature Foundation is also calling on Government and organizers of events and activities to ensure that there are enough waste disposal facilities available;” patrons who want to dispose of their garbage are sometimes unable to do so because there aren’t enough bins on the roadside or at the beaches or at event locations. Therefore we are asking that more emphasis is being placed on having proper garbage disposal facilities available during these events. There should also be a scheme where beaches are cleaned regularly instead of waiting on NGO’s and Volunteers to clean garbage. We also urgently need legislation banning certain plastics as the situation is now more or less out of control,” concluded Bervoets.