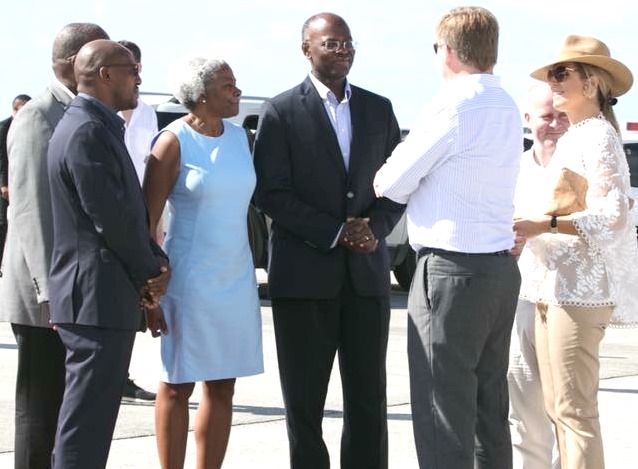 The Dutch Royals arrived from Saba on Saturday, December 2, 2017 after participating in the Saba Day celebrations. They were greeted on the tarmac by His Excellency Governor Eugene Holiday, his spouse Marie Louise, the Honorable Prime Minister Rafael Boasman and the SXM Airport COO and Acting CEO, Michel Hyman.

Hyman said he was pleased that everything went smoothly with the Dutch Royal visit. He commended his team and the Police authority for making the whole operation during their arrival and departure seamless.

The Royal visit was to show support for the islands, following a catastrophic hurricane season. The visit was also meant to underline their commitment to the reconstruction of the islands and facilitate related projects.

His Majesty King Willem-Alexander had previously visited St. Maarten on September 11, 2017, to assess the island’s damages in the aftermath of Category 5 Hurricane Irma which struck the island on September 6, 2017. The King’s first guided tour at the time was of the devastated Princess Juliana International Airport.

The royal visit came to an end on December 2, 2017 when the King and Queen departed SXM Airport at 8:00pm to return to the Netherlands.