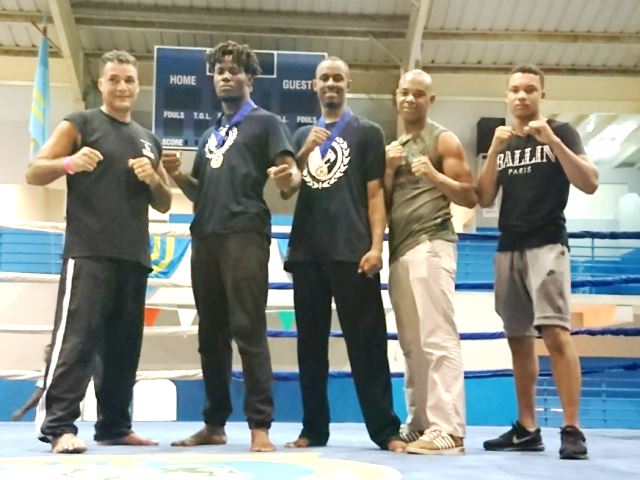 Lewis was scheduled to fight against Oscar Sosa from the Dominican Republic, but a last minute cancellation led to Lewis fighting Shaneilson Schoop of Curaçao. From the first round Lewis dominated the fight, finishing the first round with a standing eight count for Schoop, who was literally “saved by the bell.”

Lewis dominated the subsequent rounds with superior kicking technique and strength. Schoop spent most of the third round defending himself on the ropes. After three rounds Lewis was unanimously declared the winner.

Marsham faced his scheduled opponent, Joshua Karsters from Suriname. This was Marsham’s 4th professional Muay Thai kickboxing fight. The first round started with heavy punching attacks by Karsters, but Marsham defended well and counter attacked. In the second and third round Marshal increased pace and pressure on his opponent and Karsters rapidly started weakening. In the third round, Karsters had to take a standing eight count on two occasions. The last kick Marsham landed was full in Karsters’ stomach from which he could not recover. The referee counted him out and Marshal won the fight by TKO.

The St. Maarten team was joined in the corner by former European and world champion Jerry Morris, who currently lives in Holland, but was on vacation in Aruba. He offered his assistance with coaching the team, which was a great honor and extra boost for the St. Maarten team.