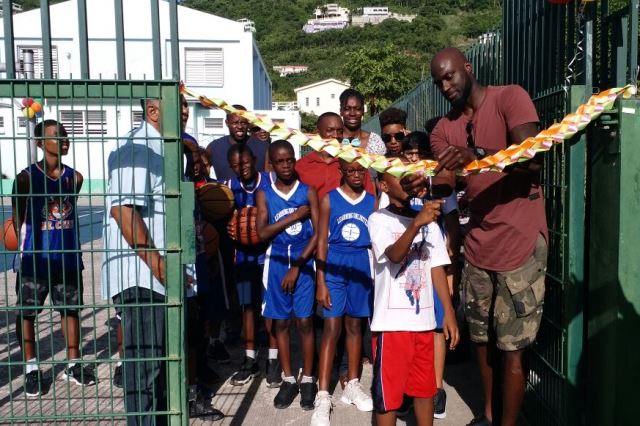 SOUTH REWARD – The St. Maarten Community Collective, South Reward celebrated another milestone event for the community on Sunday afternoon when the MOU between the community association and the Milton Peters College was finally signed for the use of the outdoor basketball court.
Speeches were done by Community Collective South Reward’s President Mrs. Zahira Hilliman-Marmar, facility manager Mr Richard Woods, Professional basketball player Mr. Patrick Hilliman and community collective treasurer Ms. Everonique Levenstone.
President Hilliman-Marmar gave a brief overview as to the initial formation of the Community Collective- South Reward and the importance of it’s presence in their community as well as the impact of community togetherness. Mr Woods who wears two hats,  facility manager at The Milton Peters College as well as member of the Community Collective- South Reward highlighted the collaboration between the Milton Peters College and the Community Collective and the need for even more community partnership support.
St. Maarten’s own professional basketball player and resident of South Reward Mr. Patrick Hilliman firstly commended the board, partners and members of the Community Collective- South Reward of the outstanding work they have committed themselves to benefit the South Reward community and by extension St. Maarten.  Hilliman shared his journey from playing high school basketball in the United States, to college basket ball, his move to Spain where he played professional basketball for four (4) years before moving to Holland where he also played professionally for another two years. He also spoke to specifically to the two attending under 13 basketball teams of the importance of maintaining good grades in school while maintaining good performance on the court. “In order to maintain your basketball scholarship or remain on the basketball team you must maintain good grades in school, it is a requirement”, said Hilliman.
In attendance was Member of Parliament Ardwell Irion and Keoma Hamer of The Cabinet of The Prime Minister.
Although not present for the celebration of the inauguration of the South Reward Basketball Court, Prime Minister The Honorable William Marlin, himself a resident for almost 30 years of the South Reward said he was happy to have been able to assist the community organization. Immediately after he was approached sometime last year about support, he contacted the Managing Director of Windward Roads and the company agreed to replace the asphalt base of the basketball court free of charge.
Prime Minister Marlin traveled to New York on Saturday for meetings at the UN as part of the Kingdom delegation. Prime Minister Marlin addressed the UN meeting on Monday afternoon and on Wednesday will fly from New York to Washington DC to join the St. Maarten delegation negotiating the US Pre-Clearance agreement.
Mr. Michael Sprott and Mr. Dambruck were hired for the finishing touches, Mr. Sprott provided the professional outdoor coating and markings for the court while Mr. Dambruck’s company, Safe Connections did the trenching for the cabling and installed the LED lights.
After the brief inaugural ceremony a friendly game was played by the Learning Unlimited and Junior Cats, both under 13 basket ball teams of which the Junior Cats triumphed.