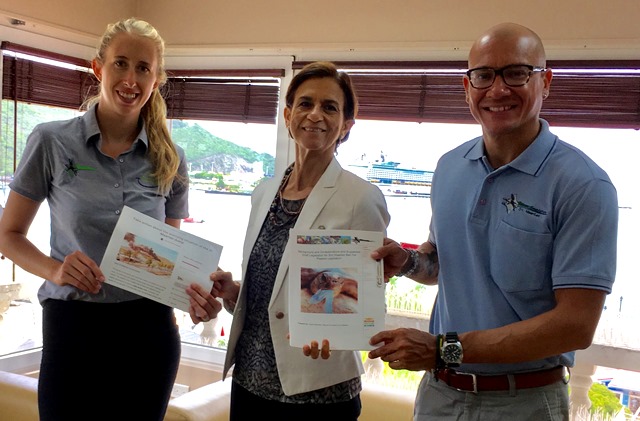 The Nature Foundation drafted a guiding document which lays forth the steps necessary for Parliament to draft and vote on a law which would ban single use plastic bags, one of the most environmentally damaging products on the island and a major contributor to the current situation at the Philipsburg dump. “We were very excited to meet with the President of Parliament the Honourable Sarah Wescot-Williams in order to present our findings officially to Parliament, including draft legislation, supporting documentation, a guideline for policy makers drafted by the United Nations and the steps which other countries, including Aruba, took in order to ban plastic bags. It is now up to our decision makers to push this initiative through,” commented Tadzio Bervoets, Nature Foundation Manager.

Nature Foundation Project Manager Melanie Meijer Zu-Schlochtern also presented President of Parliament Wescot-Williams with the results of the Nature Foundation petition calling for Government to find an immediate solution to the situation at the dump in the Great Salt Pond. Some 1800 residents have signed the petition calling for a solution to the most significant environmental challenge on the island. Plastic bags are one of the major contributors to the situation at the dump.

Wescot-Williams, during the meeting, also confirmed that she was also working on a draft law and has been in contact with decision makers in Aruba who worked on establishing the ban there. MP Wescot-Williams has also been engaging the community on public opinion of banning plastic bags and the social and economic impacts a ban would have as well as looking at various alternatives to single use plastic bags once a possible ban goes into effect.