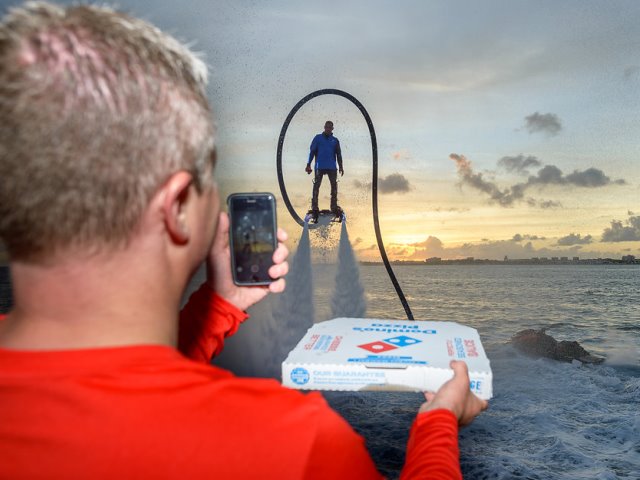 PHILIPSBURG, Sint Maarten – In what we’ve come to expect from Domino’s like delivering a pizza by crane to the stage of Heineken Regatta or via Winair to surrounding islands or perhaps the delivery by helicopter or to the International Space Station, of which those two were April Fools stunts, Domino’s St. Maarten actually delivered hot pizzas to the President of Domino’s International Ritch Allison and two of the three Vice Presidents in attendance: Brian Trier and Fredric Lund on board the Catamarans Lambada and The Golden Eagle in a JetPack.

The delivery was made possible by the team at Sea Fun Water Sports on Kimsha Beach while about 120 of the Domino’s Presidents Meeting attendees looked on in amazement. The “delivery driver” hovered some 50 feet in the air while he approached the two vessels with the pizza order in hand. After successfully handing the first pizza to Allison, he delivered the other two to the Vice Presidents who looked on in awe, as none had any idea of what was about to happen, nor had ever seen anything like this. 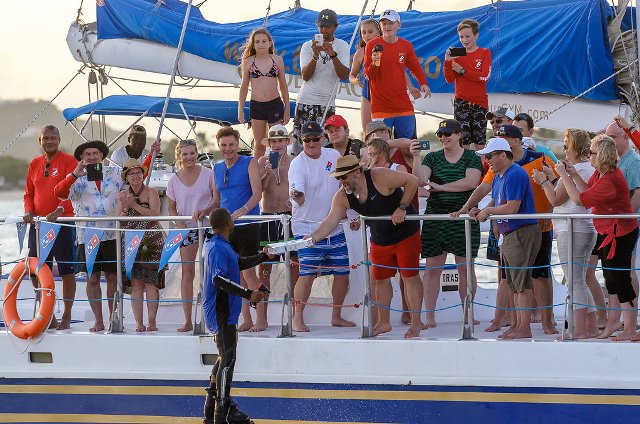 Several hundred onlookers, who were near the bay side on Simpson Bay Resort and on Kimsha Beach watched as the JetPack Domino’s Flyer performed about 15 minutes of stunts, dove in and out of the water, and looked like what many described as Iron Man flying and twisting about in his Blue and White LED illuminated Domino’s jersey.

“When everyone saw the tall streams of water heading our way it quickly grabbed their attention.  As he drew closer, it was quickly apparent that he was holding pizzas and this really blew everyone away after a fantastic afternoon on the water.  To see the faces of those on board when the pizzas were handed over was a memory I know I will never forget,” said John Caputo, St. Maarten’s Domino’s franchisee.

“This week has been such an incredible showcase of our island and I cannot thank enough those that made it all that much better.  I know for sure most of these visitors will be back on vacation and they will be heading home having truly been wowed by our Friendly Island and the local Domino’s team,” Caputo continued.

The group was met on shore by 3 Carnival dancers, who escorted everyone to Buccaneer Beach Bar where they had an amazing beach barbecue under the stars while fireballs illuminated the beach.  It was the perfect ending to the day.

The meetings wrap up at the end of the week and many attendees chose to stay on and further enjoy all St. Maarten has to offer. Details of the Convention and thanks to all those involved will be forthcoming in a future press release.