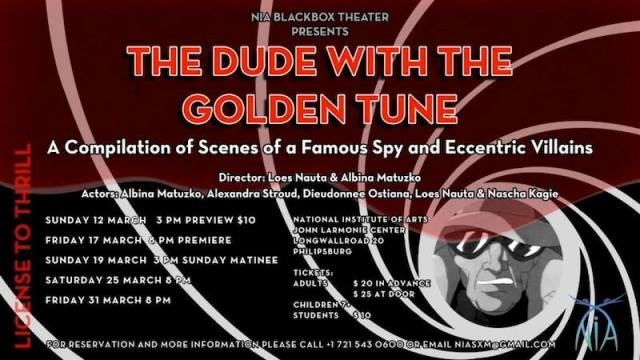 PHILIPSBURG – NIA Black Box Theater is presenting the following performance: “The Dude with the Golden Tune,” which is a compilation of scenes of a famous spy and eccentric villains.

The Dude is the hero in the various famous spy stories, adored by many women, however, he always manages to wind up in a pickle like, in chains, in shackles, tied up or overpowered by an enormous laser weapon. The villains, on the other hand, are immature, theatrical, bombastic and vicious.

Those are reasons enough to get a closer look at them. They are: Dr. No, Elliot, Silva, Goldfinger and Mr. Big, who all make their appearance in this chilling, exciting and comical review of a handful of James Bond movies.

Five talented actors will take the stage and walk the audience through the exciting life of a well-known spy. Direction is by NIA drama teacher Loes Nauta, co-directed by multiple actors. Dieudonnee Ostiana, Alexandra Stroud, Albina Matuzko, Nascha Kagie and Loes Nauta show their most evil and comic sides for each of the characters.

Reserve tickets early by emailing: niasxm@gmail.com. Tickets cost US $20 in advance, US $25 at the door and US $10 for children (7+) and students.

Come out and see this wonderful exhibit of our collective cinematic past!