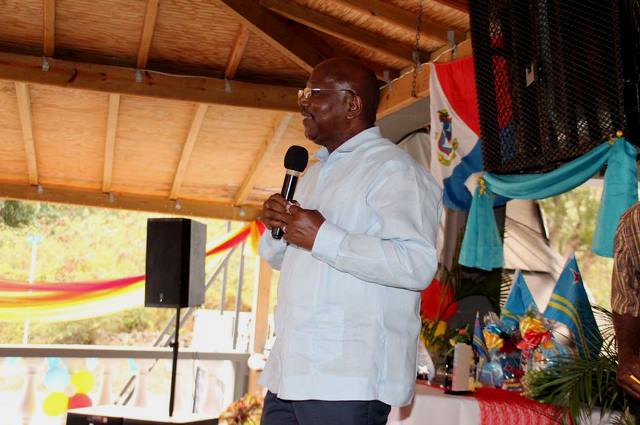 PHILIPSBURG – Prime Minister William Marlin, during the Aruba Day ceremony organized by the Chuchubi Foundation, recently stated that the ties between St. Maarten and Aruba go beyond our shared history of being part of the Kingdom of the Netherlands, as it is even deeper than cultural bonds, as blood ties make us family.

Prime Minister Marlin further alluded to the fact that visiting San Nicolaas in Aruba is like being in Middle Region or Cole Bay, as the family ties have never been broken, but rather remained strong.

The Prime Minister used the famous quote from Franklin Roosevelt, which states, “Friendship among nations, as among individuals, calls for constructive efforts to muster the forces of humanity in order that an atmosphere of close understanding and cooperation may be cultivated.” With this the Prime Minister drew reference to the fact that the Chuchubi Foundation seeks to cultivate with its activities an “atmosphere of close understanding and cooperation.”

As it relates to cooperation, Prime Minister Marlin stated that one area that needs urgent attention is transportation, as he speaks from personal experience of the difficulty passengers have been encountering in getting from St. Maarten to Aruba and vice versa. Prime Minister Marlin strongly believes that we have to work closely with the government of Aruba to ensure that our people can travel straight to and from Aruba and St. Maarten.

Another area of cooperation Prime Minister Marlin is eyeing is in the area of tourism. The Prime Minister further stated that both St. Maarten and Aruba are leading tourism destinations in the Caribbean, and cooperation in this field cannot be limited to just learning from each other from afar, but should result in closer and intensified collaboration between our respective tourism authorities that would bring mutual benefits.

Prime Minister Marlin congratulated the recipients of this year’s awards and extended once again greetings on the occasion of Aruba Day.