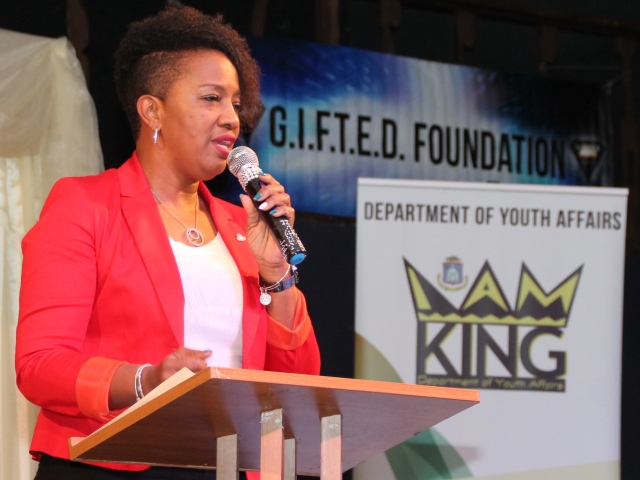 PHILIPSBURG – The Minister and Ministry of Education, Culture, Youth and Sport, in collaboration with the Gifted Foundation, hosted the second part of the “I am King” trilogy series of events. The panel discussion titled, “Man-to-Man: A no-holds barred conversation,” contained a panel of men 24 years and under and 25 years and over.

The panels varied as various vocal men and young men throughout the community were part of the discussion. The audience was also vocal, and participated in the discussions and answered the questions posted. Mr. Lenworth Wilson Jr. hosted the event, and Mr. Nils Katsberg of Unicef was also present and relayed to the audience the importance of a male’s development in our community.

Minister Jacobs launched the official posters for the I am King campaign, whereby various men within the society are pictured on the posters with quotes of their definitions of manhood and the role of a man in today’s society. Minister Jacobs encouraged the audience to not only focus on the negativity, but the positive attitudes and behavior the men in our society exhibit as well as provide ideas and solutions for a change.

She further encouraged all to take an active role in being the change they wanted to see, and dedicating time and energy to finding ways to contribute to building up and supporting our young men as we prepare them to be the Kings they are destined to be.

The evening ended with a two-hour long panel discussion and refreshments were provided by the Ministry.

“Change can only come, when the mindset of the person is altered. We can’t force laws and policies on people, if their mindset isn’t ready to accept them,” uttered Mrs. Shermina Powell-Richardson at the end of the discussion.