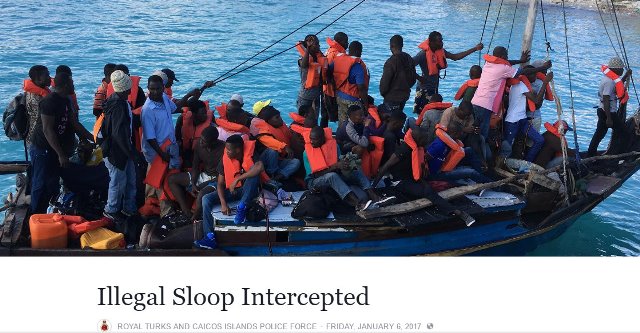 TURKS AND CAICOS — A motorized wooden boat from Haiti was intercepted at approximately 11:30 am on Thursday 5th January 2017 at 23 miles South East of Providenciales. The vessel was spotted by officers of the Royal Turks and Caicos Islands Police Force- Marine Branch.
The 25-foot yellow and blue boat powered by one engine and sail were escorted to the South Dock port where officials from various Police units, Border Control, and other Government and Non-Government agencies were on hand to assist with the processing of these individuals.
There were 84 souls on board consisting of (seventy (70) males and fourteen (14) females).
All 84 persons were later transported to the Detention Centre for further processing and detention.
A search for illegal drugs and firearms were conducted on the sloop, but nothing was found.
The communities of the Turks and Caicos Islands are encouraged to contact law enforcement with any information concerning the whereabouts of any illegal migrants or on pending sloop arrivals.
Source: ROYAL TURKS AND CAICOS ISLANDS POLICE FORCE