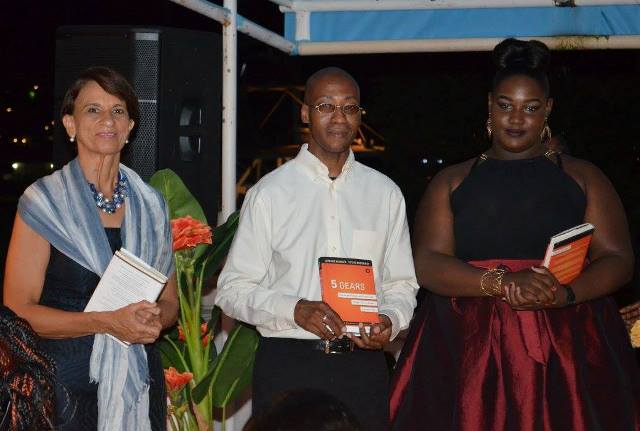 COLE BAY – “In the spirit of joy and thanksgiving, heartfelt congratulations must be expressed to The Victorious Living Foundation team for hosting the first VLF Leader Worth Following Awards 2016,” stated one of the awardees, Ambassador Alicia Liverpool, founder of the David Company.

Liverpool added: “Leaders Worth Following who lead with integrity of heart are much needed in the world today. Giving recognition to such leaders is equally honourable. As a recipient of this award on December 3, the esteem has been rewarding and will always be deeply regarded.”

The sentiments echoed from the 85 attendees at this event were: “powerful, fantastic, wonderful, and empowering experience.” Awardees were: Dr. Liverpool, and Asha Stevens, founder of the Asha Stevens Hillside Schools. Both of these dynamic leaders were supported by the persons who nominated and crowned them as leaders worth following.

They were awarded with a beautiful diamond award, which celebrated their accomplishment as Victorious Living’s first recipients of the Leader Worth Following Award. Their awards were in the category of “Beyond You Leadership;” putting others above themselves. Ambassador Liverpool defines a leader worth following as: “One who leads themselves and others to ultimately become all that they were created to be and do.”

Leadercast, the largest global one-day leadership conference, whose motto is to create leaders worth following, endorses VLF’s Awards and provided leadership books for the awardees and the three nominated finalists, Roy Cotton, Jr., Mhakeda Shillingford, and Jim Rosen, who could not be present. His gift was received on his behalf by President of Parliament Sarah Wescott-Williams. Leadercast, hosted via live simulcast by Victorious Living, is slated for May 5, 2017, with the theme: “Powered by Purpose.”

The late, Officer Gamali Benjamin received a posthumous Leader Worth Following Award for paying the ultimate sacrifice as a “beyond you leader” when he tragically lost his life in the line of duty on August 8, 2015. Gamali’s father Gilbert Benjamin received this award on his behalf amidst a somber yet respectful acknowledgment of this deserved honour by the audience.

Benjamin stated: “I was very grateful in being the recipient for my son. It is about his legacy. He loved law enforcement and the community.” In reference to the event, Benjamin said: “Victorious Living did an outstanding job. I enjoyed every moment of it. Thank you Victorious Living for this gesture in awarding him.”

The evening was filled with excitement, fun, inspiration, education, good food, artwork by budding artists Leola Cotton and Lindy Jacquet, and more. Funny lady Rosa Richardson brought the house down with her comedy act, which had the audience in stitches, yet gave them much food for thought.

Keynote speaker, Certified John Maxwell Coach, Nelson Els who shared how to become a leader worth following, stated that the event was fantastic and well put together. He noted that the community can’t begin to realise the tremendous value that Victorious Living is adding to the community through events such as this. He underscored the importance of recognizing leaders in the community and stated that Victorious Living is really building the nation. He shared how significant it was to see MCs Darren Wilson Sr. and Joy-Ann Van Arneman, past members of VLF’s youth wing, Y2X. “This is no coincidence, as it is through building people we build a nation,” he said.

Victorious Living thanks all contributors for making the event a success. Visit Victorious Living at The Royal Palm Plaza #92 Front Street, Philipsburg or website: www.victoriouslivingsxm.org; e-mail kamgumbsvlf@gmail.com or call (721) 524-8731 to learn more about their services.