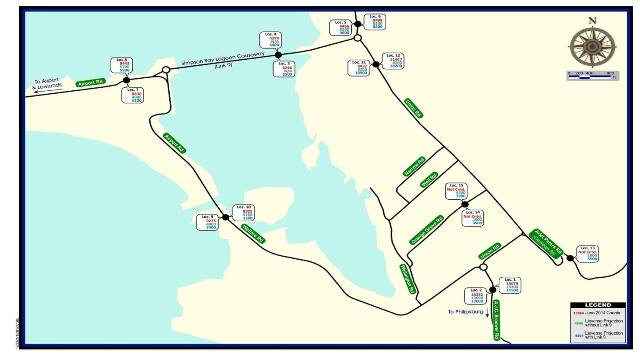 A number of studies were made prior to the construction of the Causeway which strongly pointed to the need for an alternate route.

The Causeway according to the 2014 study is clearly relieving traffic on both Union Road and Welfare Road.  Average daily traffic volumes on the Causeway were over 4200 vehicles per day in each direction, which was almost ½ the daily volumes on Union and Welfare roads, the study points out.

The study included video and tube traffic counts for the causeway, Welfare Road and Union Road.  A total of 10 traffic count locations were selected as well as the three Roundabouts.

Based on the findings, the following recommendations have been made: improve the geometrics of the Wellington/Orange Grove, Wells Road and Narrow Roads.  These roads appear to have 50 per cent of the traffic of Welfare Road and Union Road. Enhance the use of these road corridors to facilitate internal trip generation/workarounds by the motorized traffic and direct traffic off of Welfare Road/southern part of Union Road and the AJC Brouwer Roundabout.

Evaluate whether left turn lanes or back out/parking lanes that can be practically built to reduce the side friction and allow a more free flow of the through traffic on Welfare and Union roads.  Specific consideration must be given to maintaining sufficient parking to maintain viability of the commercial establishments along the road corridors.

Provide a left turn storage lane at the southern roundabout from Union Road and investigate whether the second lane around AJC Brower Roundabout can be safely restored.  With the existing pavers and raised rumble trips in the outside lane, traffic is definitely being discouraged from using the outside lane.

As part of the agreement for the development of the Causeway project, any traffic bottlenecks that would continue would be looked into and a solution found in order to facilitate the free flow of motorized traffic.

It is essential that residents and visitors have a traffic congestion free experience when driving from one area to the next.  Visitors come to the island to enjoy what the destination has to offer and don’t want to be sitting in traffic un-necessarily.

CH2M Hill, Inc. is a global leader in consulting, design, design-build, operations, and program management.  The company employs 26,000 on six continents working on some of the most complex projects on the planet.

The company partners with clients in energy, water, environment and infrastructure to design integrated solutions that deliver lasting value.