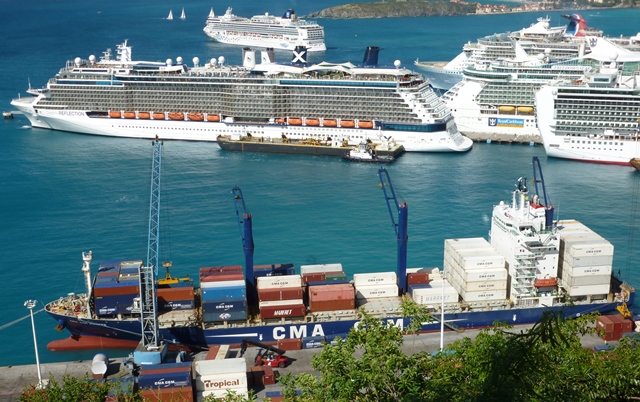 PORT ST. MAARTEN – The countries cruise numbers will go back up to over two million cruise passengers within several years based on strategic planning and the pro-activeness of Port St. Maarten Management in promoting cruise tourism and the destination (marketing).

“The port always looks ahead and plans in a strategic manner.  All stakeholders have a role to play in order to keep the destination ahead of its competitors.  This means that timely investments have to be made in order for Port St. Maarten and the destination to maintain their number one status in the Region and remain competitive.

“There has been much discussion during the Central Committee meeting of Parliament with respect to the draft 2017 national budget.  Some clarity is needed with respect to some of the statements that have been made regarding the financial results of Port St. Maarten and the state of the cruise industry.

“Based on the continued investments in new areas by destinations and cruise lines, such as in The Bahamas where MSC Cruises is purchasing a private island, Ocean Cay for US$200 million; new ports coming online like Amber Cove in the Dominican Republic, an investment of US$85 million; new cruise piers in St. Kitts and Antigua; emerging cruise markets in Asia; the aforementioned has had its impact on the Caribbean thereby limiting further growth.  North eastern Caribbean yields where we are located are softer as the focus is now on growing the Cuba region which we also call the western Caribbean.

“Despite the challenges, our cruise numbers will grow once again based on discussions that we have had with our cruise partners to secure business for the upcoming cruise seasons. Cruise seasons go through a business cycle.  It has happened in the past and this time it won’t be the last.  Cruise lines adjust their itineraries annually, but you have to be cognizant and plan ahead and look for the opportunities which we have been doing,” Port St. Maarten Management pointed out on Sunday.

“The financial challenges that Port St. Maarten has been confronted with is that we are not able to increase any fees or estimate increases in our planning forecast models due to market conditions.  We are cognizant of industry trends and developments and what our competitors are doing.  If we would proceed by raising fees, this would have a major negative impact as we have been told by our cruise partners.  As a port we cannot cut costs overnight.  Our port facility is over 15-years old.  Upgrading and maintenance costs increase over time which has been the case.

“According to our financial model, our losses in revenues amounts to about US$12 million due to delays in implementing harbour operational concessions or facility fees.

“Even though we loss US$12 million on income over the years, we still had to maintain focus on the cost of sales and marketing of the Port and the destination.  The reality is that there is no entity which promotes Cruise nor is there any destination marketing authority.  These are the realities of the day that we live in, but the port has been doing its share and taking the lead where it concerns cruise and destination marketing.  We will be attending for the second time the Vakantie Beurs Utrecht in The Netherlands in January 2017 to promote cruise and the destination.

“Specifically in the year 2014 the Port St. Maarten Group of Companies incurred a consolidated loss of US$9 million as was recently highlighted in the local media.  It should be noted that 2014 included two very specific one off items such as the Florida Caribbean Cruise Association (FCCA) Conference and Exhibition hosted by Sint Maarten which incurred expenses to the Port of US$6.5 million, and secondly, the settlement of the litigation case of US$4 million net. Those two items are chiefly responsible for the significant losses in 2014, and results from normal operations would have shown a modest profit over 2014.

“Overall the cleaning and maintenance costs line items are going up due to the ageing of the facilities. With part of the facilities now being over 15 years old, this is reflected in higher cleaning/maintenance costs.  Port St. Maarten has to also maintain properties outside the main facility in Pointe Blanche which is related to the safety and security of cruise passengers.

“Port St. Maarten has also acquired other properties over the years as a strategic move to continue to develop the tourism product of the country.  The port’s footprint has more than doubled.  Investments have been made in additional buildings on the properties of Cargo and Cruise (Cement Bagging Facility & Area, Cargo Facilities Homeporting Facility among many more investments); facilities have been upgraded and expanded RO-RO ramps and main pavements, access roads, cruise passenger restrooms, tour bus area, car rental and road area, Cruise Terminal Building and Surrounding area for amenities, Taxi area and parking ramp and roundabouts.

“Investments related to shopping area waterfront, fueling depot, booths and parking area; past dredging mobilization and sand storage; Causeway and beautification and maintenance of surrounding areas, roundabouts, clearance office at the Bridge; Walter Plantz Square beaches and street area maintenance and upkeep; Captain Hodge Wharf main ramp to the square; and with all of these improvements and investments there has been an increase in operational costs.  If you don’t expand, modernize and continue to be innovative, it results in stagnation and not being able to meet the demands of the industry resulting in your competitors taking the business away.

“The Port’s mission is to provide a high level of customer service, and at the same time continuing with port development and innovation across all areas of our business while maintaining a leadership role in the economic development of our country. As Port we have delivered on the value proposition and don’t need to defend its track record. As Port we are also aware of the compliance requirement.

“If we talk about good corporate governance to the detailed Enterprise Risk Assessment (ERA) which was completed in 2016 by the experts Ernst & Young Advisory Services, as Port we will be executing as a follow-up priority in 2017 the aforementioned which prepares our strategic development for 2017 and beyond. The ERA is the process of planning, organizing, leading, and controlling the activities of an organization in order to minimize the effects of risk on an organization’s capital and earnings.

“Enterprise risk management expands the process to include not just risks associated with accidental losses, but also financial, strategic, operational, and other risks. Delays in strategic investments are also part of this process.  Please note, that if the Port was not number 1 certain comments made in the Central Committee meeting of Parliament might have some merit, but as part of the audit umbrella, our strategic plan clearly dictates what needs to be done and we work diligently on executing our plans of action and approaches in order to ensure our place within the Region.

“As Port, we agree with the comments that Government owned companies should communicate more with the Shareholder, but this also goes both ways and is a two-way street.  With a government changing five times in five years, the Port has faced this challenge which has delayed a list of pending matters that have still not been executed by the Shareholder as written in audit statements from PriceWaterhouseCoopers that includes a huge amount of formal request and actions.

“We hope to address these pending matters in the next Shareholders meeting.  Port St. Maarten continues to be proactive by sailing into opportunities that would result in business for the destination over the long-term and ensuring employment of our people directly and indirectly,” Port St. Maarten Management concludes.