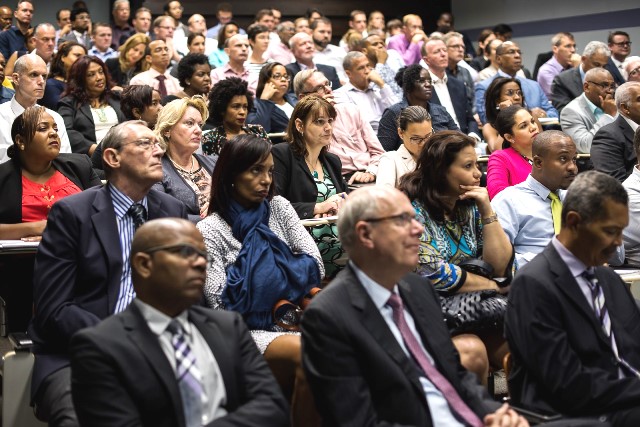 WILLEMSTAD, Curaçao – The Board of Financial Supervision (CFT) in collaboration with the University of Curaçao Dr. Moises da Costa Gomez held the seminar: “Towards Sustainable Public Finances” on December 8.

The seminar was aimed at bringing the importance of sustainable public finances in the long term to the attention of a wide audience. Several experts, guests and interested people from all countries of the Kingdom attended the seminar. 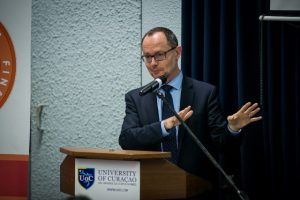 On the part of the IMF Xavier Debrun gave a comprehensive outline about what exactly sustainable public finances comprise, and which factors may affect it, such as interest rates, economic growth and budgetary balance.

Additionally, Debrun draw attention to the fact that the number of countries with fiscal rules and regulators has increased dramatically over the past two decades, reaching the mark of 125. Debrun also indicated that public finances should be dealt with prudently in order to ensure their sustainability. In that regard, he highlighted that the level of debt is crucial in determining whether public finances are capable to remain sustainable in the long term. Debrun therefore recommended the adoption of a maximum level of public debt as a budget standard. An objective underlining this standard sees to it that enough effective policy space stays in place, creating room to deal with economic shocks.

In order to view the topic in the context of Curaçao, outgoing Minister of Finance of Curaçao José Jardim on the one hand presented a conceptual underpinning of sustainable public finances for Curaçao and on the other hand offered an application of this concept by means of various hands-on scenarios. This vision was set forth on the basis of a retrospective at the history of sustainable public finances of the Netherlands Antilles. Through extrapolation of the economic growth figures to the current situation in Curaçao, Jardim gave one of the two variables on which the drafting of the debt quote should be linked.

The next variable in the drafting of the debt quote, namely the interest on the issues of debt securities, was suggested by Jardim through a detailed illustration of the debt reform and the new financial rules laid down in the Financial Supervision Kingdom Act. Jardim advocated on the basis of these two variables that a debt quote should not be a generic standard, but rather a specific one, because of the differences in the variables that result from the distinguished individual situations of the countries.

The analysis of Jardim revealed that with the current interest rate, combined with the present economic growth trend, a debt quote in the order of approximately 40% is sustainable in the long run for Curaçao. Jardim also pointed out that the fiscal rule of a balanced account, which is applicable in Curaçao, is most effective in an environment with low interest rates coupled to low economic growth.

After lunch the panel discussion was led by Ivan Kuster (former Secretary-General of the Ministry of Finance). In addition to the two speakers, Ersilia de Lannooy (director CBCS), Candia Joseph (director SOAB St. Maarten) and Etienne Ys (former Prime Minister and Minister of Finance of the Netherlands Antilles) participated in a lively panel discussion on the theme of sustainable public finances.

During the panel discussion it became evident that all panel members are in favor of additional budget standards, guaranteeing the long-term sustainability of public finances. Budgetary rules should be country specific. With regard to the debt-standard the view prevailed that, given the features the Caribbean countries of the Kingdom have in common, in time a target quote of about 40% could be applicable for all three countries.

CFT chairman Age Bakker afterwards thanked the speakers and panelists for their presentation and frank discussion on how sustainable public finances can be achieved and moreover also maintained in the long term in the Kingdom. According to him, the consensus between the speakers and panel members forms a solid basis to initiate talks with the countries about the introduction of a debt standard in the countries’ legislation.