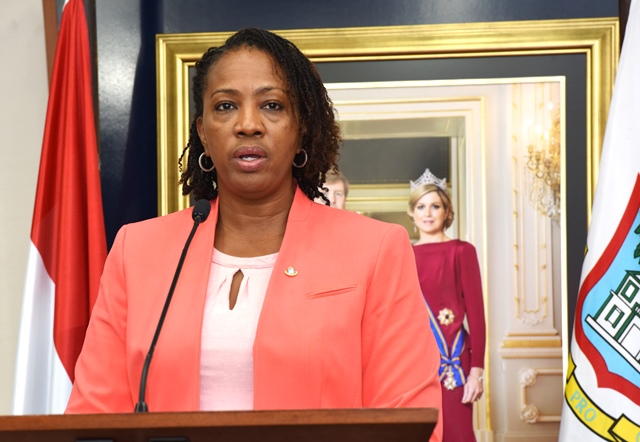 PHILIPSBURG – Minister of Sports Silveria Jacobs said on Wednesday, September 21, that the repair of lights at basketball courts in St. Peters and Middle Region has been an ongoing process and not an election ploy.

This comes in light of an announcement by the Minister that lights were replaced at the St. Peters basketball court. “I would like to clarify where each sports facility fall because there have been some discussion in the public ‘oh, why only now,’” Minister Jacobs stated.

“I must indicate that the sports facility or the basketball court at St. Peters is the property in long lease of the youth council. The court in Middle Region is private property donated to have this court released and it remains in the hands of the owners. It’s not government’s property,” Minister Jacobs said.

She explained that some of the basketball courts are on private property and as such there is a procedure involved when it comes to replacing light bulbs by the Sports Department including the court at Middle Region and the John Cooper/José Lake Ballpark.

“The youth council (in St. Peters), receives a subsidy through the Youth Department, which covers maintenance, management of the center, insurance and a minimal amount for electricity and water. As such they are the ones actually responsible for maintenance. We understand that this is a challenge and therefore from time to time government has stepped in and assisted as we have over the weekend,” she explained.

Meanwhile, the Minister disclosed plans for repairs to a number of lights on several basketball courts on the island. “We are looking at the other facilities as well to be able to ascertain how many we can actually get done within the 2016 budget year,” Minister Jacobs stated.