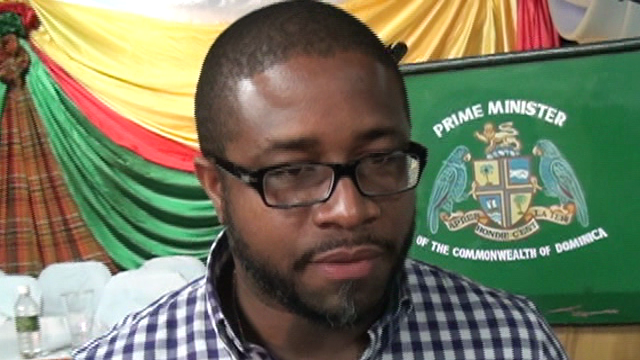 GREAT BAY – Former MP and current candidate for the United St. Maarten party Romain Laville came close to a complete acquittal in the Court in First Instance yesterday. In the end, Judge Dirk Gruijters sentenced the 38-year old politician for wrongdoing to a 1-month conditional prison sentence with 2 years of probation for illegal gun possession. The court acquitted Laville of making threats against the life of his former fellow faction member at the UP, Jules James, in 2012 and against steel pan icon Isidore York later in the same year.

More interesting than the criminal charges was Laville’s extensive explanation of the circumstances that had led to his confrontation with James in June 11, 2012 in front of the parliament building, and with Isidore York at the Divi Divi Little Bay Resort in November of that year.

Especially the first confrontation has a strong political flavor and Laville wasted no time laying it all out in court. It all goes back to that now almost forgotten budget debate in March 2012 when the dismissal of 180 employees at the Pelican Resort (where James was a director) was a hot topic. Laville, the youngest MP to be elected to parliament and the faction leader of the United People’s party, told the court that there had already been issues on the campaign trail, where his social views clashed with what he called “the capitalist views” of the party leadership.

“My party did not want me to touch the issue, not to stand up for the employees at the Pelican Resort,” Laville said. “But I made a promise on the campaign trail and I wanted to stay true to that promise.”

When Laville went into too much detail of that history, Judge Dirk Gruijters cut him short and asked him to return to the matter at hand – the threat against James. It appears that after the budget debate on March 22, 2012, Laville and James did not speak to each other until their confrontation on June 11.

“James antagonized me on every occasion in parliament. My life was threatened after I left the party and declared myself independent,” Laville said. “That day, he came to harass me and I told him that he was taking things too far. Was I upset? Absolutely. Did I use foul language? We both did. But I did not say that I would shoot him; absolutely not. I told him how I felt but I did not threaten him.”

After the confrontation on June 11, James went to the police to file a complaint, claiming that Laville had said, “I will fucking kill you.”

There were three witnesses who backed up James’ claims: Dr. Lloyd Richardson, Sylvia Meyers and Frans Richardson. The first two were members of the UP-faction at the time. Frans Richardson was an independent MP. Other witnesses however, like (former) MP Louie Laveist said that they had not heard these words.

Laville also denied that he had threatened Isidore York on November 23 at the Divi Divi Little Bay Resort. He acknowledged that York, aka the Mighty Dow, had an issue because he was not asked to perform at a show the controversial Tempo network organized that year in St. Maarten. “He wanted $15,000 to perform there and the network was not paying, but I told him that I was not taking those decisions.”

York claims that Laville had lifted his shirt to show him a gun, saying, “anybody who messes with me, I will take care of him.” Laville denies this happened, and policeman Carty, who witnessed the scene, told investigators that Laville had said this in a joking way.

The MP himself told the court that he had been friends with York for a long time and that he does not understand why he would make the allegation.

“My life was threatened and we joked about that a lot. They want to get you, Dow said, referring to my old party. If you ask me to understand why he would say something like that about me I have to say that I don’t understand it myself.”

The third charge against Laville concerns illegal firearm possession. To cut a long story short: in 2010, after he was elected to parliament, Laville applied for a gun permit. He received it on August 23, 2012. When the permit expired at the end of the year, he wrote a letter to then Minister of Justice Roland Duncan with a request for an extension; he never received a reply, but he kept the gun in a safe at home. “I did what I had to do,” Laville said, adding that there is no gun policy and that a gun permit remains valid after a holder has asked for an extension until the minister decides otherwise.

According to the court, Laville’s renewal was denied based on an order from the attorney-general. Reason: the investigation against the MP for the alleged threats.

Laville described his one-day detention as “scary and worrisome for my family and my finance.”

The prosecutor based the evidence on the complaints by James and York and on witness statements. As far as the gun is concerned, Van Nes noted that Laville knew that he needed a permit for it and that this permit had expired. “Nowhere in the law does it say that you are covered once you have applied for an extension. The defendant had a permit in 2012 but not in the years after that. He should have known better and surrendered the weapon.”

Attorney Sharia Bommel asked the court to declare the prosecution inadmissible for violating the 2-year reasonable term, but Judge Gruijters denied this later, saying that the prosecution had started the day Laville was taken into custody, now one-and-a-=half year ago.

Bommel furthermore referred to a statement by James from 2013, where he said that he had not felt threatened by Laville on June 11, 2012. “There are statements from different witnesses, but they have all been heard long after the incident; and all these statements differ.”

Bommel asked the court to acquit her client of the threat against James and she went the same route for the charge of having hreatened Isidore York. “He filed a complaint only a week later and witnesses did not hear anything.”

Judge Gruijters denied the request to declare the prosecution inadmissible and acquitted Laville of the threats against James sand York. While the statements of James and of witnesses Dr. Lloyd Richardson, Frans Richardson and Sylvia Meyers all support each other, the judge found one crucial piece of evidence that led him to acquit Laville of the charge.

“You said: If I had had a gun then I would have shot you. That refers to the situation on March 22, and it is therefore not a direct threat. It was intimidating, but you expressed what you felt then.”

The court also acquitted Laville of threatening Isidore York, based on the statement from policeman Carty that Laville had said in a joking way to him that he would end up in his black book and, after pulling up his shirt to show something: “I f anybody messes with Me, I’ll take care of him.” The term black book is not a threat against someone’s life either, the court ruled.

The matter of the firearm ended differently, even though the court acknowledged that, as a holder of a permit who has asked for an extension, Laville was entitled to rely on his assumption that he would not be prosecuted.

“That does not save you,” the judge said, “because I have been unable to determine whether you did apply for an extension in 20102. This means that there is proof that you had a weapon without a permit.”

Considering al, circumstances, the court did not find it necessary to hand down an unconditional prison sentence. “You acted wrongfully,” Judge Gruijters said. “You should have surrendered the weapon. On the other hand, the authorities knew you had a weapon; you never made a secret out of it. Therefore, a prison sentence is uncalled for, but you do deserve a punishment.”