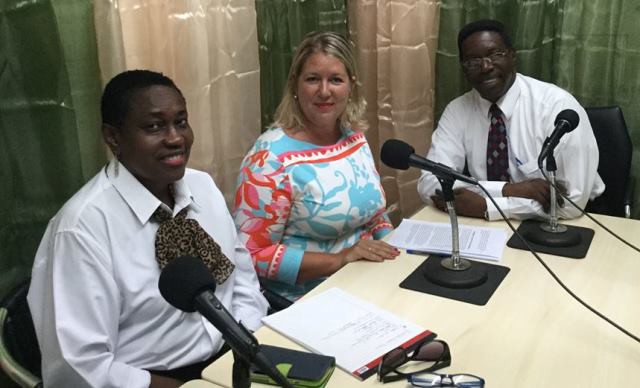 PHILIPSBURG, Sint Maarten — Members of the Prosecutor’s Office St. Maarten made their first appearance on the live talk show “View Point” hosted by Fernando Clark on Thursday, July 21. The talk show airs on the Voice of St. Maarten Radio Network 102.7 FM daily from 12:00pm to 1:00pm.

Members of the Prosecutor’s Office will appear on the show at the end of each month as part of efforts to better connect with the community. Representatives will highlight a different topics of interest to the community and talk about the work of the Prosecutor’s Office which extends further than just prosecuting criminals. The exact date of their appearance on programme will be announced by the talk show host.

Van Nie also talked about the efforts needed to prevent as much as possible youngsters from falling into criminal behaviour. School and afterschool activities are important for the development of children and investing in these activities is very important, she stated.

The Ms. Lalie Center in Cay Bay, where youngsters can be locked up when they come into contact with the law, is a vital part of tackling juvenile delinquency. Van Nie said more options should be developed to give guidance to youngster and lead them back on the right path.

Van Nie has worked in St. Maarten for three and a half years. Last week it was her final week with the Prosecutor’s Office. She will return to the Netherlands and continue to work as a prosecutor in Utrecht. The Prosecutor’s Office wishes her all the best in her new post.