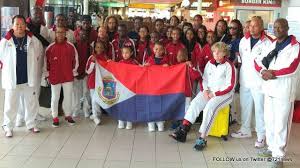 SIMPSON BAY – Athletes from the St. Maarten King Yen Tae Kwon Do School, left the island for Aruba on Friday, May 27, to take part in the 17th International Aruba Open Tae Kwon Do Tournament being hosted there on Saturday, May 28.

According to Grand Master Theo Liu, the St. Maarten team consists of a full delegation of 33 persons, including the athletes, parents, coaches and also the team’s medical doctor.

“We will be competing all day Saturday and we are confident that we are good enough to win many gold medals during the tournament,” Grand Master Liu said confidently as the team prepared to board their flight to Aruba.

Many parents and supporters of the athletes turned out on Friday to give a warm send off and best wishes for the competition.

Photo: Parents, athletes, and coaches are joined by a medical doctor and Grand Master Theo Liu (left) at the Princess Juliana International Airport, Friday, on their way to a major Tae Kwon Do tournament in Aruba on Saturday.