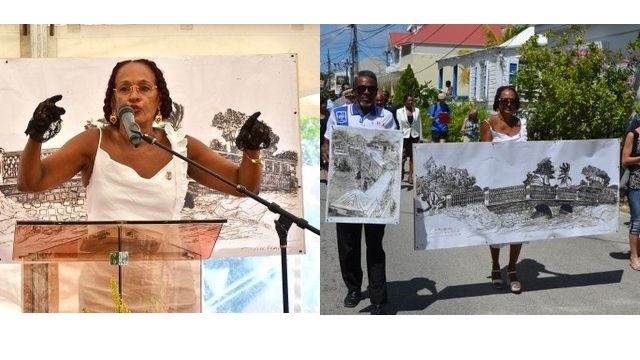 GRAND CASE, St. Martin (December 2, 2015)—The traditional period design of the Grand Case Bridge should be restored in this once mainly fishing village, said attorney at law Patricia Chance-Duzant.

The current design of the bridge, completed not too long ago, is “soulless” and not in keeping with the “heritage and culture” of Grand Case, said Chance-Duzant.

The attorney is particularly referring to the design of the balusters, railings, and barriers of the 1922 construction of the bridge, which lasted until damaged by hurricane around the late 1970s. The signature design of the old bridge had became a Grand Case landmark, which was powerfully and gracefully captured in a mid-1970s engraving by leading painter Roland Richardson, said Chance-Duzant.

The subsequent repairs and construction authorized by government in Marigot, especially regarding the railings and balusters, have been met with objections from people in Grand Case, said Chance-Duzant. “Although the old bridge lasted for over 60 years,” the “new modern bridge” built after the hurricane damage “did not even withstood 30 years,” said Chance-Duzant.

In 2007, following the establishment of the Council for Quartier II, which includes Grand Case, a more organized call was issued about how the bridge design should reflect the village’s unique identity. By this time, Grand Case had become popularly known in St. Martin and abroad as the “Restaurant City of the Caribbean” – because of the wide array and quality of international restaurants and eateries along both sides of its entire main street.

In 2012, Chance-Duzant wrote to the Collectivity’s president, championing her native village’s “demand that the work on our historical bridge, even while [undertaking] the objective of preventing flooding in Grand-Case, be conducted in accordance with safety requirements but loyal to the aesthetic, architectural and historical structure, in accordance with the Collectivity’s engagement as well of those of the cultural sections of the Council for Quartier II.”

Meetings and conversations with government and SEMSAMAR officials and the contractor of the current construction often come down to the cost of the bridge “project” and who would design the balusters, said Chance-Duzant.

“I am willing to work with others to raise funds toward the restoration of the traditional design of Grand Case Bridge, which is a patrimony of the people of Grand Case and the Collectivity, and of the whole island of St. Martin,” said Chance-Duzant.

Furthermore, in 2015, “Sir Roland Richardson and I found two artisans in our District, one who had a mold already, and both were willing to make any mold of the antique banisters” that any contractor wishes for, said Chance-Duzant.