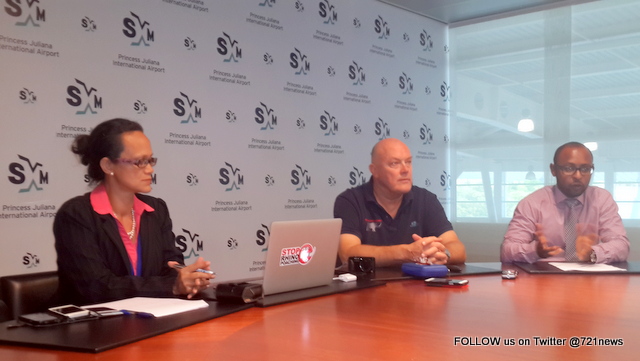 PHILIPSBURG, St. Maarten – SXM Airport announced on Thursday morning that the final preparations have been put in place for the first SXM Airport air show which will take place this Sunday.

The Boardwalk Jazz Festival will also be an added attraction for this first of its kind event which will also bring the curtains down on the St. Maarten Day week.

World renowned aerobatic pilot Frank Versteegh will be the air boss for the islands first air show which will be held over Great Bay.

Residents of St. Maarten and visitors alike have been invited to the Boardwalk to witness the event with the center of activities taking place on the Walter Plantz Pier.

Attendees to the air show are also being asked to park their cars in the area of the ring road and walk to the Great Bay beach where the spectacular air show will be staged.

Air Boss Frank Versteegh gave an outline of the planned event on Thursday morning during which he outlined the entities that have been brought together to ensure a safe SXM Airport air show, which will be the first in the islands history.

With the element of the Jazz festival, the event is being billed as a family event aimed at putting the icing on the St. Maarten Day week of celebrations.