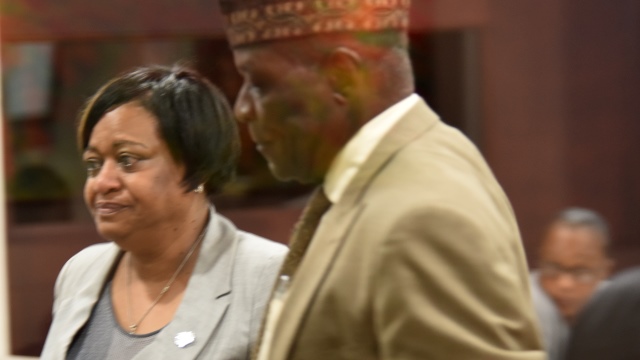 Philipsburg, St. Maarten – The Princess Juliana International Airport Holding Company, (PJIAH) decided to suspend the managing director of SXM Airport, Ms. Regina Labega  for three months  on November 11, 2015, St. Maarten Day. While the whole island was celebrating the unity of the people, PJIAH said it held an “extraordinary general meeting of shareholders” to take its decision “on the basis of article 8 sub clause 3 of the articles of incorporation.” However, Ms. Labega was not given an opportunity to plead her case before they took the decision to suspend her as from Friday, the 13th of November, 2015.

Only two days earlier, the whole Parliament of St. Maarten praised Ms. Labega for the excellent job they all agree she is doing at the airport. Ms. Labega came to Parliament, at her own request, to present the Annual Report and Financial Statement of the company for the year 2014, which showed an increase of 13.9% in the income.

The following day (Tuesday, November 10), she was in court to hear the decision of the judge in the case she bring against the execution of the instruction Prime Minister Marcel Gumbs gave to the Supervisory Board of Directors to remove her from her function because he did not issue her a declaration of no objection.  The court decided to deny her petition but also said that the government has agreed not to collect the penalty which the company (airport) would have had to pay if she remained in her function after Friday, November 13th. Some legal experts interpret this to mean that she could remain in her position until her appeal against the result of her screening by the VDSM has been heard.

However, PJIAH was afraid that if they did not act, Labega would be functioning “illegally” after November 13, 2015.

There is an obvious conflict among the board members as several of them reportedly said they did not attend the extraordinary meeting . In fact, the minutes of the meeting noted that “the chairman of the supervisory board of directors (of the operating company – ed.) has refused to follow the request of the Prime Minister (to remove Ms. Labega from her function – ed.) and as a consequence thereof, the company may possibly be in violation of article 8 of the national decree, which, by the way, at this stage, does not prescribe the formal dismissal of the director.” According to some legal experts, the article does not prescribe the suspension of the director either.

Sources told 721 News that the chairman of the supervisory board of directors of PJIAH was not at the “extraordinary meeting” and that apparently he is not in agreement with the decision of the meeting.

Also, 721 News has learned that attorney Richard Gibson Jr. chaired the “extraordinary meeting” however his law firm is also the one representing government in this case, a “serious conflict of interest”, according to some experts.

It is still not clear if this decision to suspend the managing director of SXM Airport is legal. However, 721 News has learned that Ms. Labega, who broke down during the parliament meeting, is now on sick leave.