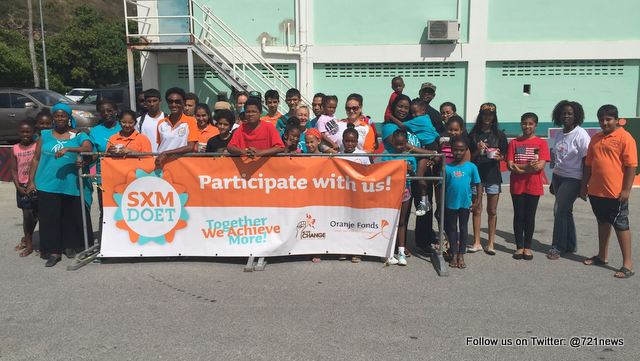 The SXM DOET project team is proud to announce the official launching of the second edition of SXM DOET, which will take place on March 11th and 12th, 2016.

SXM DOET is part of the Dutch Kingdom’s largest volunteer initiative, hosted by the Oranje Fonds, in the Netherlands, and locally executed by the Be The Change Foundation, partnering with private persons. The goal is for foundations/organisations to get projects executed and finalised within two days that they otherwise would not be able to. This due to a lack of resources, either due to manpower and/or financial constraints.

2015 saw the first ever participation of Sint Maarten, alongside Statia, Aruba, Curacao, Bonaire and the Netherlands, and this with great success. During the first ever edition of SXM DOET, 958 persons registered to volunteer while many more attended (over 1000 volunteers participated during the two SXM DOET days), 27 organizations participated with over 30 individual projects. Many with lasting impressions, either through memories (i.e beach days, brunches with musical and artistic entertainment) or through actual material improvements (i.e. doghouses for strays, obstacle courses for rehabilitation clients, fixed playgrounds, planted mangroves, painted murals, greenhouses/ gardens for school going kids and the elderly, amongst many more).

Wednesday October 28th will see the official launch of the second edition of SXM DOET. This launch will be geared towards businesses that are interested in partnering with SXM DOET (volunteering, donating goods, etc.) as well as geared towards NGOs who want to learn more about DOET and setting up a project for 2016. The launch will take place at 6:30pm sharp at the John Larmonie Center (next to the sports auditorium) in Philipsburg. It will be an opportunity to hear from Oranje Fonds representatives and the SXM DOET project team, to gather more information on SXM DOET before solidifying partnerships and projects, share their ideas, ask questions, and learn about funding. The first official viewing of the new website and SXM DOET video will also take place.

RSVP is recommended, please do so by emailing info.sxmdoet@gmail.com or by calling +1 721 580 1437. There is no cost to attend and a follow up kick off event will be hosted in early December, geared towards volunteers, NGOs and partners.

The SXM DOET project team is looking forward to another successful edition, with people collaboratively trying to make a difference to their own surroundings, as ‘together we achieve more’.