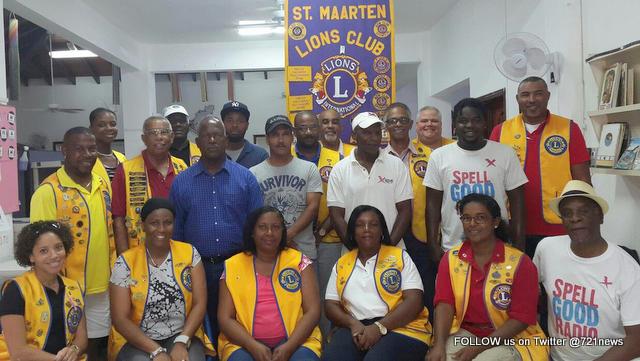 Even though the amount is short of the $30,000 target set for the Radio-thon, the Lions Club members are satisfied with the joint effort and the generous pledges that were made by members of the public in such a short amount of time.

“We received very few pledges from the many large companies on St. Maarten, St. Martin or St. Barths, so we are still hopeful that they will come on board during the coming week so that we can announce a total collection that is closer to our target figure,” said St. Maarten Lions Club President, Eldert Louisa, following Saturday’s Radio-thon.

Speaking on behalf of his fellow Lions and members of the sister clubs, he thanked radio listeners and members of the public for calling in and doing their part for the benefit of Dominica, following the devastating floods which claimed more than 30 lives several weeks ago.

Lion Eldert Louisa said considering the various efforts that have been made on behalf of Dominica in recent weeks, the Lions Clubs were amazed at the outpouring of sympathy from the various communities for this latest effort.

During the four-hour appeal Saturday, more than 100 persons called with their pledges, and their funds will be collected in the coming days.

For persons still wanting to assist, the appeal is being kept open until Friday, October 2, 2015 for contributions and donations. Donations can be made to the various Lions Clubs and in the case of the Lions Club of St. Maarten, at the Lions Den in Sucker Garden next to the Sol Gas Station.

Arrangements have also been made to donate directly through the St. Maarten Lions Club “Dominica Relief Fund” account at the Windward Islands Bank, which is:

Persons making online banking donations via WIB@ Home or wire transfer donations are kindly asked to be sure to put “Dominica Relief Fund” as the recipient subject for the transaction.

“We could not have had such a successful start to our Dominica Relief Fund without the generosity of the general public and the assistance of the many people who volunteered their help. The media and especially the two radio stations Media One

X104.3 FM and 102.7 FM Voice of St. Maarten PJD3 did a fantastic job of getting their listeners to call in and pledge during the Radiothon” said the St. Maarten Lion President Eldert Louisa.

He thanked his club and board members and also the club and Board members of the sister clubs for their tireless efforts behind the scenes for the past weeks preparing for the Radio-thon and on Saturday for seeing the event through to it’s successful end.

“We still have a lot of work to do getting all the funds in and then we will be in touch with our sister Lions Club in Dominica who will be responsible for ensuring that all funds collected are distributed to those in most need,” said the Club President.