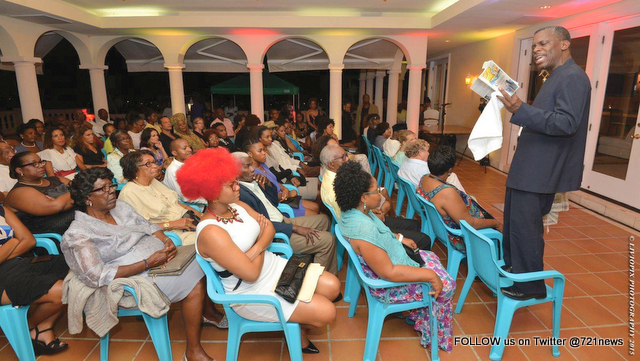 In Matz’s Columbus can be found, among others, a “termite crew,” the dread roll call by death, “the kings of Aethiopia,” a host of saints, “and the utterly ingenious appearance of the notary. As in the English original of this performance poem, with its inextricable, multilingual planks, the same legion tenants the Spanish, French, and Italian translations in the one book,” said HNP publisher Lasana M. Sekou.

“History and Fiction can become bride and groom,” in Columbus, the Moor, said Viala, and “The edition in four languages highlights … inter-linguistic performance. It is not the meaning of words that matters, but their encounter with one another, Toscanelli speaking Latin, the Arawaks speaking Taíno, Columbus speaking either Spanish, English, French, Italian and Latin…  It does not happen often in literature.” Dr. Viala is the Caribbean Studies Centre director in the Spanish Department at England’s Warwick University. She is also a native French speaker.

Matz, a decorated WWII veteran now in his 90s, is a literature professor at Long Island University in New York City. He has also taught in Italy. His book-length poem comes “From the depths of his personal experiences, plotted through a diversity founded in World War and international academic acclaim,” said author Dr. Jay Haviser.

Matz “brings us a unique glimpse into the mindset of cultural contact between the New and Old Worlds,” said Haviser, a leading archeologist in the Caribbean, where Columbus first encounters people of the Taíno civilization in 1492.

In her review Viala is clear: “Columbus, the Moor by decontextualizing the historical texture of Columbus story (which journey? which island? when exactly? we don’t know and it does not matter) opens a new route for bringing together the languages of the region.”

“Instead of a historical traditional story, what we have is a Concert of voices – Columbus talking to historical characters (Toscanelli, Las Casas), to his ship (a female voice), to himself (like symptoms of his madness at sea) – echoes the voices of the sailors (English, Irish, Spanish), the voices of the Arawaks on the island awaiting for this encounter and wondering if it will be a curse or not, … the voices of children singing,” said Viala.

The Italian poet Andrea Zanzotto once wrote: “The literary works of Charles Matz are extremely complex. What distinguishes his work is his plunging into the bottomless pit of lasting orality, the long and varied history of poetry-song-ritual.”

“It is in this brilliant depth, often in the disturbing Dante-esque caves of this pit where Matz rears his Columbus interpretation and voyages it toward our averted gaze. What we have here is a terrifying testament to add to the epic genre of the Atlantic World,” said Sekou, himself a poet.

Viala lodges the poem’s protagonist solidly in a New World reality of “multicultural and multilinguistic Caribbeaness.” What else to make of her quintessential “quincentenario” tag of irreverence, to “remember Burning Spear’s Pirate’s Dub in which Columbus is nothing but a rascal and ‘a damn blasted liar’…”

Why would Matz, a renaissance scholar, dub the Admiral of the Sea “the Moor”? (As “terribly problematic for Spanish history” as that is, according to Viala and literary critic Fabian Badejo)? Reading Columbus, the Moor for oneself is worth the discovery.

Matz’s advocacy of “shout poetry,” with its Mediterranean and African influences, could be telling of his take on certain titles, topics, and multifaceted directions, said Sekou. Matz has worked with the great Zanzotto and Norman Mailer. He founded New York’s CAM Art Company and has contributed articles on contemporary artistic concepts to Opera News, Vogue, and Testuale. Matz was also awarded the Chevalier de la Légion d’Honneur of France.