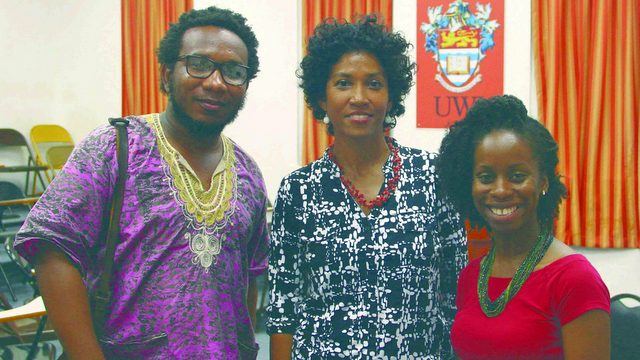 The St. Martin poet started off her visit as a featured reader at the festival’s opening on August 6. “I’m honored to have shared the stage at the opening ceremony with novelist and keynote speaker Oonya Kempadoo, engaged with the people of Dominica and other creative and iconic persons from the neighboring islands,” said Ward, who also publishes her work under the name Faizah Tabasamu.

In addition to reading her poetry at the opening ceremony and at Purple Turtle Beach, Ward conducted the creative non-fiction workshop at the UWI Open Campus.

Dominica is called the nature island of the Caribbean, and “the Nature Isle festival is a well-organized festival of great integrity and robust as the mornes of the island itself,” said Lucien this week.

The festival focused on nature in 2015, and “based on the theme, ‘Beyond the Green,’ I’m convinced that environmentalists are not the only ones who can advocate sustainability on our islands for future generations. Poets, playwrights, and novelists can do it too. It is up to all of us to preserve what we have, whether it is our island’s natural resources, culture or history,” said Ward.

Since her poems were published by HNP in Where I See The Sun – Contemporary Poetry in St. Martin (2013), and the subsequent posting of her poetry videos online, Ward has been a featured guest poet and workshop leader at the St. Martin Book Fair and the Anguilla Literary Festival.

Rochelle Ward (Faizah Tabasamu) is a language and literature teacher at St. Maarten Academy and may be better known in St. Martin for her mega-workshops on hair and organic beauty care products for Don’t Break The Comb foundation.

“Faizah’s invitation to participate in literary festivals is a sure sign that others are taking note of her steady development as poet, and as a blogger at rochelleward.com and saltfishandlace.com, where she regularly writes about hair and beauty care, Caribbean lifestyle and fashion, St. Martin’s environment, and reviews books. Her writings have appeared in The Daily Herald, Today Newspaper,trulycaribbean.net, mnialive.com, sxminfo.fr, bajanreporter.com, and repeatingislands.com,” said Sekou.