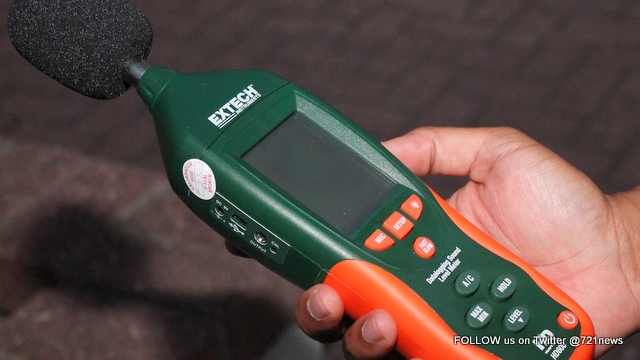 GREAT BAY, Sint Maarten (DCOMM) – Under the direction of the Inspection Department of the Ministry of Tourism, Economic Affairs, Transport and Telecommunications (Ministry TEATT), the Multidisciplinary Control Team comprised of officers from Economic Control, Control Unit and the Community Police Officer, continues to carry out controls on businesses all over the Dutch side of the island on weekends. These controls on average last four to six (6) hours and extend into the early morning hours.

Recently of the eight (8) businesses controlled, two (2) establishments were visited to control and advise proprietors regarding maximum permitted decibel noise based on complaints received by the Inspection Department (one being a popular entertainment spot in the Simpson Bay area).

The objective of the control was to check business licenses as well as noise decibel levels from entertainment establishments.

One (1) of the eight (8) businesses was closed down because they couldn’t provide any documentation proving that they were operating legally.

Bars, restaurants and vendors in Pond Island, Oyster Pond, Cupecoy, on the premises of Alegria Hotel, and Simpson Bay were checked.

All businesses and vendors that were controlled had some issue relating to the objectives of the control.  These included noise nuisance; engaging in unlicensed activity; permits could not be produced upon request of authorities as required by law.

Seven (7) out of eight (8) businesses and vendors received a written warning and summoned to the office the next business day and thereafter referred to the Department of Economic Licenses for further follow up.

The Inspection Department TEATT will continue with these routine controls on establishments for noise nuisance and other violations related to economic activity and will strictly enforce the law where violations are detected.

Concerns and complaints can be lodged by calling 542-4509 during business hours from Monday through Friday.

Details regarding the nature of the complaint, name and address of establishment, time and date of violation will be asked or could be submitted by sending an email with this information to IDEZ.Inquiries@sintmaartengov.org.