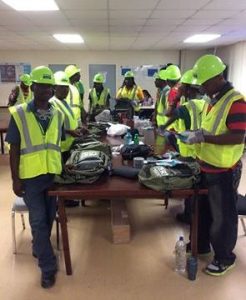 The aim of the training is to set up teams that will be first responders throughout the 17 districts in Antigua and Barbuda.

Participants of last week’s exercise, drawn from five districts, engaged in sessions covering the use of emergency telecommunications, first aid and map-reading.

Facilitators were drawn from NODS, the Antigua and Barbuda Fire Department and the St John Ambulance Association.

The week-long training ended with exercises that simulated an earthquake, which incorporated basic search and rescue and first aid, and the use of VHF radios.

The team members were also presented with CERT kits, which included a helmet, gloves, goggles and CERT vests to clearly identify them, among other items used in emergencies. These kits were funded by the Caribbean Disaster Emergency Management Agency (CDEMA) and its supporting partners.

Two other workshops, targeting the remaining eleven districts, will be held later this year. A similar training was held in Barbuda in February.