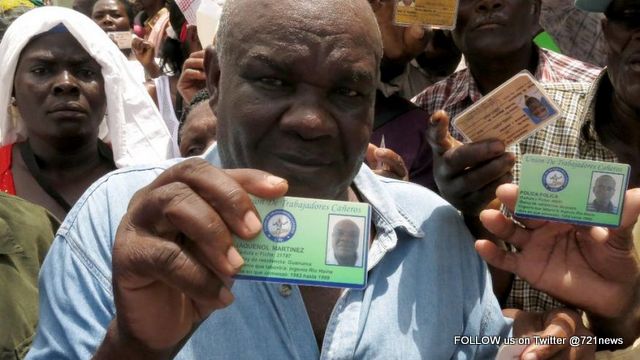 Dominican Republic, AP — Thousands of people began preparing Thursday for deportation from theDominican Republic after failing to obtain legal residency as part of a government program to crack down on migrants, most of them from neighboring Haiti or of Haitian descent.

Many expected authorities to immediately start deporting people, but the government said it would be a slow, ongoing process.

The repatriations are not going to be “a witch hunt,” said Interior Minister Ramon Fadul. “It will be a gradual process, as it should be, without any sudden surprises.”

Ruben Paulino, migration director, had warned that starting Thursday agents would patrol areas with a high concentration of Haitian migrants to repatriate those lacking the required documents.

Dozens of people were turned away at midnight Wednesday’s deadline after standing in line for more than 24 hours to submit applications to establish their legal status.

Even those who did apply said they are still concerned because enrollment does not guarantee a residency permit.

“Every day I wake up to that, to the fact that I’m leaving for Haiti,” said Froilan Bartelmi, a 27-year-old clothes vendor who was among the last to enroll in the immigration registration program.

Bartelmi said he doesn’t fear being deported: “I’m not going to die of hunger.” But he does worry about losing all his merchandise and being separated from his wife and 5-year-old son, who was born in the Dominican Republic.

Officials said nearly 290,000 people enrolled in the immigration registration program, but noted that only some 10,000 have provided the required documents.

The program began last June after legal challenges delayed its original launch in 2004. Non-citizens can qualify for legal residency if they can prove they have been in the Dominican Republic since before October 2011.

The government implemented the program amid international criticism of a Supreme Courtdecision that people born in the Dominican Republic to non-citizens did not qualify for citizenship under the constitution unless they had at least one parent who was a citizen or legal resident. The ruling rendered thousands effectively stateless. Officials said they will grant citizenship to some 50,000 people in this category.

An estimated 460,000 Haitian migrants live in the Dominican Republic, which shares the island of Hispaniola with Haiti.