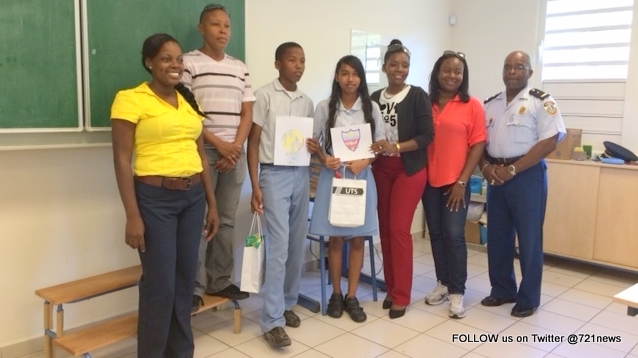 PHILIPSBURG, Sint Maarten –– The “Stand by me Foundation” is a “none profit” organization which is run by members of the Sint Maarten Police Force. The foundation recently held a drawing competition for the six graders of all primary schools on the island. The foundation which receives donations from local businesses and private organizations has been active for the last three years.  The foundation is focused on helping the less fortunate youth in those areas where education is concerned. The reason this drawing competition was organized is because the foundation at present does not have its own logo and the idea was to involve the students in having them compete against each other by drawing and designing the best logo depicting what “Stand by me Foundation” stands for. The criteria for the competition were given to what the students as to what the foundation was looking for in the logo. This competition would definitely be a way for the Police Department reaching out to the youth.

The competition was held between held between June 2015 and the results were as follows; the first prize went to Miss Savita Prashad and second prize went to Delano Pryce, both students from group 8 from the Asha Stevens Hill Side School. The third price went to Miss Clara Fleurissaint from group 8 of the Oranje School. On Wednesday June 17th the students received their prizes from the representatives of “Stand by me Foundation”

“Stand by me Foundation” would like to thank all schools for participating in this event and wish the students all the best in their future endeavors. Special thanks also go out to UTS for their generous donation.

IN PHOTO: Savita Prashad and Delano Pryce after receiving their prizes in the presence of their teacher and representatives from the foundation. From  L.to R.  Sergeants Celisha Arrindell, Fabiola Brown, Veta Euson and Chief Inspector Ricardo Henson.)