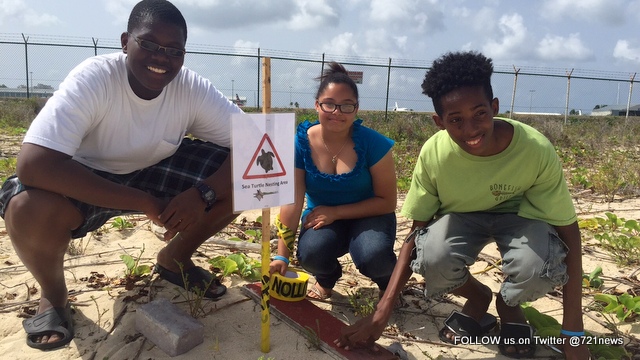 PHILIPSBURG, Sint Maarten — The first Sea Turtle nests of the season where laid last week when several nests were recorded by the Nature Foundation on Simpson Bay Beach. In response to the nesting activity students from the Milton Peters College, who are currently doing their summer job training with the Nature Foundation, cordoned off the turtle nests and built and placed warning signs along the beach informing beachgoers of the location and to keep clear of the nests.

The three students Christon Holiday, Maria Craane and Gregory Susana, also placed warning signs at the Simpson Bay Causeway urging people to steer clear of the twenty Tern nests located in the sandy area on the western end of the Causeway.

The sandy area at the western end of the Causeway has become a primary nesting site for terns over the last years and there have been incidents where the nests have been damaged or destroyed. With the signs people are now aware not to walk in the area until the nests have successfully hatched. “Christon, Maria and Gregory did an excellent job in creating and placing the signs for both the turtles and the terns and informing them to steer clear of the areas. These three are a great example of,” commented Nature Foundation Manager Tadzio Bervoets.

Sea turtle species are managed by the Nature Foundation and are protected under local and international laws and treaties. Based on ARTICLE 16 and 17 of the Nature Conservation Ordinance St. Maarten it is illegal to kill, wound, capture or pick-up sea turtles. It is also illegal to directly or indirectly disturb their environment resulting in a physical threat or damage or to commit other acts that result in disturbance of the animal. It is also forbidden to disturb, damage or destroy sea turtle nests, lairs, or breeding places. Also, it is forbidden to pick-up or to destroy the eggs of any species of sea turtle.