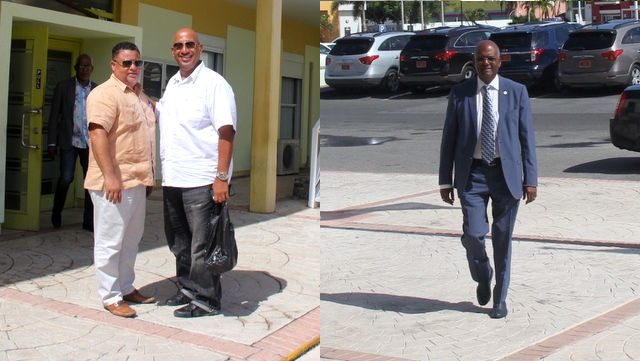 PHILIPSBURG, Sint Maarten  -– Minister of Justice Dennis Richardson received a letter from the United St. Maarten party USp Leader Frans Richardson asking for the resignation from the minister of justice. The Member of Parliament hand delivered the letter dated June 12, citing lack of communication as the main reason for the USp wanting to go another direction with the ministry. The justice minister accepted the letter however chose to discuss the letter in an upcoming coalition meeting scheduled for later on Friday afternoon at the government administration building.

The Usp Faction leader Frans Richardson recently signed with then nine-member coalition consisting of the United Peoples Party, Marlin-Romeo and de Weever making it a strong ten coalition. Richardson was given the Ministry of Justice as part of being in the coalition.

Before entering the building for the meeting Member of Parliament (MP) Frans Richardson told the press that he did give the minister the high way out and is eagerly waiting to discuss this move with the coalition in the meeting. Eight members of the coalition came to the meeting at the administration building namely MP Theo Heyliger, Frankie Meyers, Maurice Lake, Johan Leonard, Silvio Mater, Frans Richardson, Leona Marlin-Romeo, Cornilius de Weever. Representing the council of Minister were Prime Minister Marcel Gumbs, Minister Rita Bourne-Gumbs, Minister Martin Hasink, Minister Dennis Richardson and Minister Claret Connor.