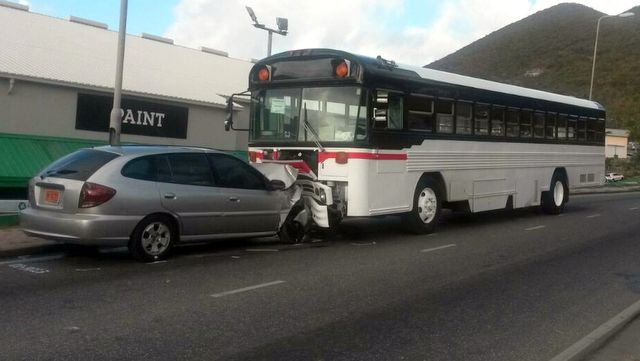 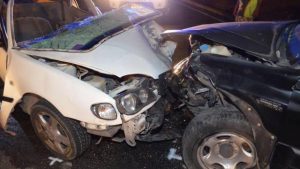 On the scene the investigating officers encountered a head-on collision between two private vehicles.

The vehicles in question were travelling in the opposite directions when they collided head on. As a result of the impact one driver remained stuck in the mangled wreckage and had to be freed using the “Jaws of Life” from the Fire Department. The driver was admitted to the SMMC for observation.

Both drivers were injured and had to be treated at the Sint Maarten Medical Centre. During the investigation on the scene of the accident the A.J.C. Brouwers road was closed to all traffic.

Traffic was diverted through hill behind the old Cake House. The traffic Department will soon finalize this investigation. 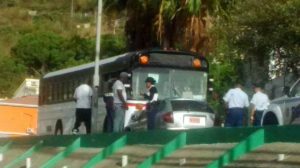 CAYHILL, Sint Maarten — The Police traffic Department is presently investigating a head-on collision which happened on Monday June 22nd at approximately 07.00. The accident between a private vehicle with license plate M-9123 and a bus with license plate P-3083 took place on the A.J.C. Brouwers road in the vicinity of Kooyman.

Vehicles in question were travelling in opposite direction when impacted causing severe damage to both vehicles. The drivers of the P-9123 suffered a light concussion and wounds to his fore-head and arms. He was treated on the scene and then transported to the Sint Maarten Medical centre for further treatment. The cause of the accident is still being investigated by the traffic department.

The Wilhelmina Straat (Parliament Building Ally) will be closed on Wednesday June 24th from 05.30 a.m. to 07.00 a.m. in connection with maintenance work which has to done in that street.

All motorists should take note of this information, to avoid any inconvenience and use alternative routes to get to their destination.