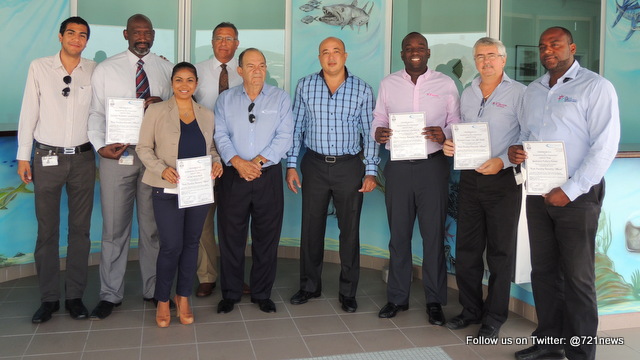 The department heads expressed enthusiasm for the training and now they possess renewed understanding of the ISPS Code and its applicability, and pledged their continued support to compliance efforts in ensuring that the country’s seaport meets all international requirements and obligations therefore ensuring the safety of all those who use the nation’s port and at the same time protecting the populace of the country where it relates to border security.

Maritime security in the Caribbean is taking on a new shape.  The Caribbean Sea is becoming a location of greater global strategic importance.

The United States Senate Armed Services Committee back in March was informed by General John Kelly, Commander of the US Southern Command, that there were new state players; more sophisticated narcotics traffickers, and possibly in time, terrorists may come to operate in the region.

General Kelly in his report noted the operational and financial overlap between criminal and terrorist networks in the region.

The General further stated during his testimony to the committee that two naval vessels the US deployed in the Caribbean will both be permanently withdrawn in the summer of 2015.

The five department heads received in-depth insights into ISPS; current prevailing security policies; received a profound knowledge of all obligations under the ISPS Code; informed on how to arrange Port Facility Security Assessments and Plans; and are versed in contingency and emergency planning.

The course started on May 4 and concluded on May 7 and took place at the Dr. A.C. Wathey Cruise and Cargo Facilities.  Captain Victor M. Loustaunau was the facilitator who represented Recognized Security Organization (Capacitacion Para el Desarrollo Empresarial en la Industria Maritima (CEDEMAR) S.C.) which is based in Mexico.

CEDEMAR S.C. was recognized by the Government of St. Maarten since 2003 and has been acting since then as the ISPS compliance advisor of Port St. Maarten.

The five department heads are now able to assist Port St. Maarten Safety and Security Manager when it comes to conducting internal audits related to port security, and to ensure that all elements of security at the facilities remain current.  The training gives the staff a grounding in the technical content of ISPS.

Port management took the initiative to ensure that Port St. Maarten which generates one third of the National Gross Domestic Product (GDP) has adequate security measures in place.  The ISPS Code is part of the Safety of Life at Sea Conventions (SOLAS) and compliance is mandatory for the 148 Contracting Parties to SOLAS.