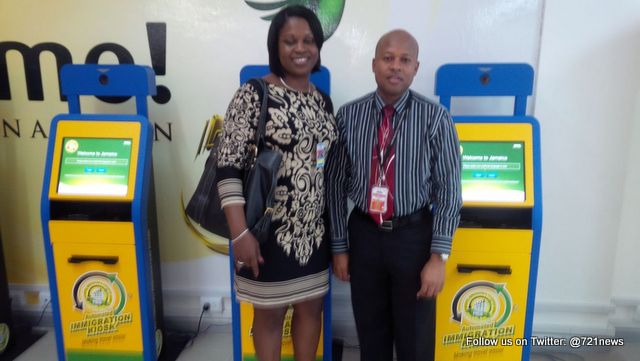 PHILIPSBURG, Sint Maarten – Independent Member of Parliament (MP) Leona Marlin-Romeo said on Monday since December 2014, the airports of Jamaica has introduced kiosks to better accommodate and manage the flow of passengers entering the country.

Independent Member of Parliament Leona Marlin-Romeo (on a private visit to Jamaica) met with the Chief Executive Officer (CEO) of the Passport Immigration and Citizenship Agency Jennifer MacDonald and the IT team to discuss the advanced technology Jamaica immigration is using to not only better manage the flow of passengers but to also identify persons that has been placed on a watch list.  This technology surpasses that of what is being used in the USA as it allows for Non-Nationals to use the Kiosks.

MacDonald, Steven Vernon the Deputy Director of Immigration and the IT team explained that the passenger flow of both Arrivals and Departures are managed through three supporting systems, Border Management System, Advance Passenger Information System and the newly introduced kiosks with Facial Recognition Software.

In light of the Princess Juliana International Airport (PJAIE or SXM Airport) presentation and the indication that a new E-Gate will be introduced, queries were asked as to why Jamaica choose the kiosk options over E-Gates, it was explained that cost and the large footprints were the major factors.

“Perhaps Sint Maarten should pay attention to what technology is being introduced in the region and enhance its current Immigration and Border Management System.

“The people that I spoke with warned about the ineffectiveness about E-gates without a proper Border Management System, facial recognition system and APIS technologies.

“It was suggested that our government and airport officials look at the entire process holistically before purchasing costly machinery such as E-gates, and to really study the current border management system and enhance that technology before seeking other ventures,” concluded Independent MP Hon. Leona Marlin-Romeo.

MP Marlin-Romeo will be addressing issues regarding the technology being used to monitor persons entering and exiting the island of Sint Maarten.