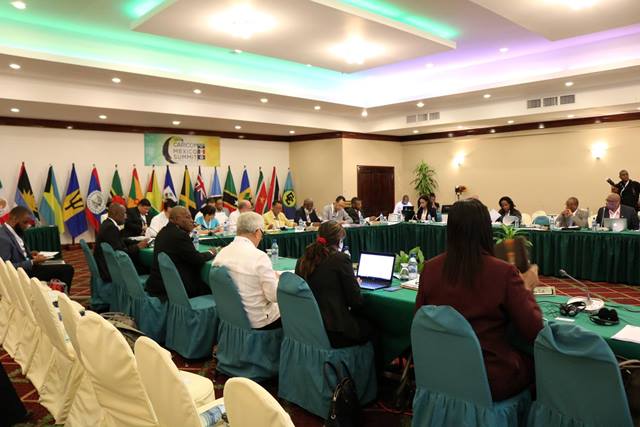 Basseterre, St. Kitts, – While leaders from across the Caribbean Community (CARICOM) were meeting in Belize for the IV CARICOM-Mexico Summit, the Federation’s Prime Minister Dr. Timothy Harris remained in Basseterre.
St. Kitts and Nevis’ Minister of Foreign Affairs, Hon. Mark Brantley was also absent from the meeting of Caribbean foreign ministers and their Mexican counterpart that preceded Wednesday’s Summit.
The main theme of the summit in Belize was cooperation for the prevention of and treatment of natural disasters.
Trinidad and Tobago’s Prime Minister Dr. Keith Rowley was accompanied by the Minister of Foreign and CARICOM Affairs, Dennis Moses.
Prime Minister Hon. Freundel Stuart led Barbados’ five-member delegation that included Minister of Foreign Affairs and Foreign Trade, Senator Maxine McClean and her Permanent Secretary Cecile Humphrey, CARICOM Ambassador Robert Morris.
Guyana’s President David Granger delegation Vice President and Minister of Foreign Affairs, Mr. Carl Greenidge.
Minister of Foreign Affairs and Foreign Trade, Kamina Johnson Smith represented Prime Minister Andrew Holness.
The one-day summit on Wednesday was co-chaired by Mexican President Enrique Peña Nieto and the Prime Minister of Belize, Hon. Dean Barrow.
Caribbean underscoring the importance of the relationship it shares with its Central American partner for nearly half a century.
CARICOM Chairman and Grenada’s Prime Minister Dr Keith Mitchell said that the region was looking forward to deepening that relationship given the changing global environment and the impact the recent hurricanes were having on the socio-economic development of the Caribbean.
He said CARICOM like Mexico, which suffered two earthquakes resulting in the deaths of several people, were not immune from natural disasters adding that “climate change is real.
He said that CARICOM and the United Nations would be co-hosting a high level donor conference on November 21 in New York to assist the countries ravaged by the hurricanes, followed by a retreat in Grenada, December 4-6, with the international private sector co-hosted by the businessman Richard Branson.
In his address, the host Prime Minister Dean Barrow noted that both Mexico and Belize face territorial challenges to their borders and the closeness of the two countries gives rise to many challenges.
CARICOM Secretary General Irwin la Rocque used the occasion to seek Mexico’s support for the Caribbean’s call for concessionary loans to regional countries following the move by developed countries and the international financial community to graduate them to middle income nations.
The Government of Mexico provided air transport for all the CARICOM Delegations, to and from Belize, City.
During the St. Kitts-Nevis Labour Party (SKNLP) administration the Government of Mexico financed scholarships and the construction of new police stations in Dieppe Bay and Tabernacle.