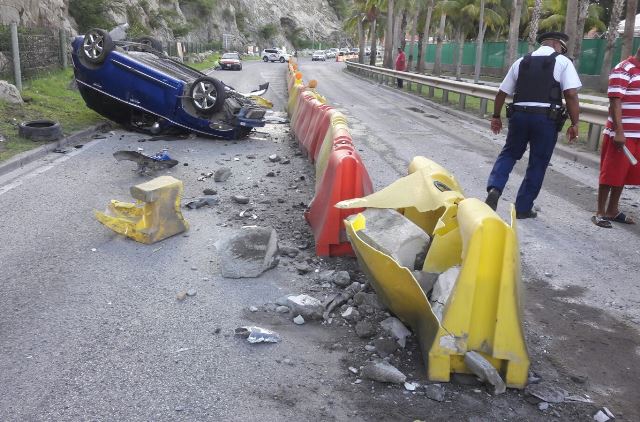 PHILIPSBURG – The Traffic Department investigated a Monday morning crash on the Juancho Yrasquin Boulevard in the area of the Cruise facility between a Chrysler Cruiser and a Honda Civic, which left two injured.

The accident involved the two vehicles that were travelling towards the Cruise Facility around 7:00am on Monday, November 14. At the same moment both vehicles came in the area where the yellow and orange water barricades are placed. The driver of the Cruiser, which was travelling at a high rate of speed, attempted to overtake the Honda.

The driver of the Cruiser then swerved back to his right, and then collided with the front right side fender of the Honda. As a result the Cruiser crashed into the barrier, which sent the vehicle into a tailspin where it finally flipped over and ended up on its top. The collision left the Cruiser seriously damaged.

Personnel from the Ambulance Department transported the two injured, who were travelling in the Cruiser, to the St. Maarten Medical Center (SMMC) where they received medical attention and later released.

The Traffic Department was also assisted by the Fire Department with the clean-up of debris.

POINT BLANCHE, Sint Maarten — The driver of a blue vehicle lost control of his vehicle and tipped over in Pointe Blanche near Port of St. Maarten close to 6:00am Monday.

The driver told police he had been late for work and wanted to pass an oncoming vehicle when he lost control.

An ambulance rushed to the scene to tend to the man’s injuries. Up to press time there was no word from authorities on the extent of his injuries. Source: The Daily Herald