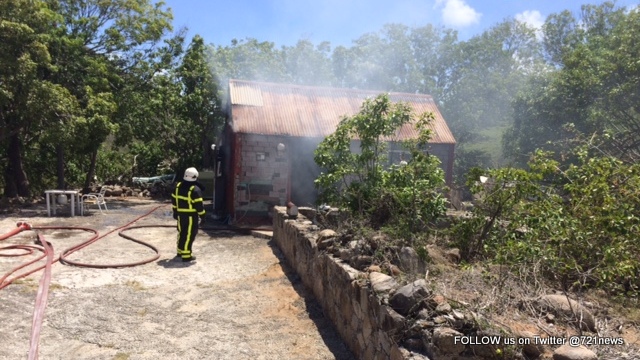 Police, Fire and Ambulance Department was sent on Saturday September 19th at approximately 01.45 p.m. to a house in Defiance next to the Car wash for a house on fire.

On the scene the Fire Department immediately went to work in putting the fire out. The home in question is a wooden structure from which a lot a smoke was coming.

The electricity to the home was immediately disconnected by personnel from G.E.B.E who immediately came to the scene.

Traffic on the Sucker Garden road, Upper Princess Quarter and Middle Region were diverted so the emergency departments could successfully do their work.

At the time of the fire no one was at home. The Fire Department quickly put the fire out.

It is still unclear what the exact cause of the fire is. After the fire was extinguished all roads were again open and traffic could flow freely.

On Saturday September 19th at approximately 04.00 p.m. Police Patrols were sent to Star Mart Cole bay to investigate an armed robbery which took place shortly before.

According to the female cashier, an unknown man dressed completely in black clothing wearing a black motorcycle helmet arrived at the establishment with another man, also wearing a helmet on a red dirt bike.

This man pulled a gun and threatened to use it while he took all the money from the cash register. The other suspect remained on the outside on the lookout.

After committing this act both suspects took off on the motorcycle. Police searched the area for the possible suspects without any positive results.

This case in under investigation by the Special Robbery Unit.

A 32 year old male suspect was arrested by the Multi Disciplinary team on Saturday September 19th between 04.00 and 05.00 p.m. after refusing to stop when receiving a stop sign from one of the officers.

The suspect driver increased the speed of the vehicle when he noticed him being stopped. In his attempt to get away he struck one of the officers with his vehicle knocking him to the ground. The suspect fled into the direction of Mary’s fancy at very high speed.

A short high speed chase by police through the Mary’s Fancy and Saunders area followed. The police succeeded in blocking the path of the fleeing suspect however he did not stop and in his attempt to get away tried to maneuver around the police vehicle but lost control and impacted the vehicle causing severe damage to both vehicles.

The suspect was taken to the Philipsburg Police Station where he remains in custody for questioning. The vehicle in question has also been confiscated for further investigation.

The officer that was struck by the vehicle has filed criminal charges against the driver.