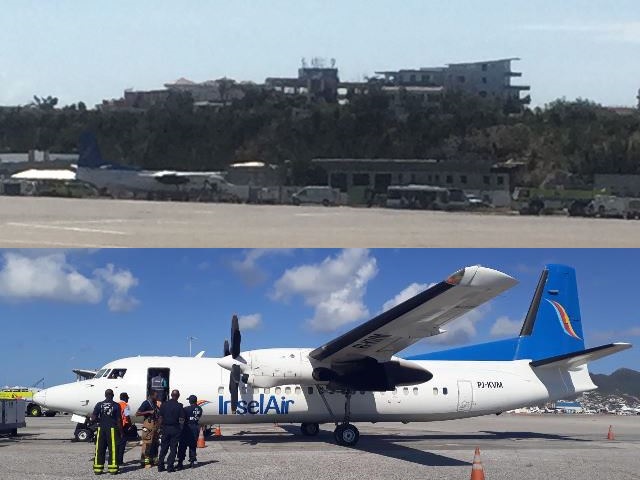 INSEL AIR INTERNATIONAL B.V. CONFIRMS THAT ONE OF ITS FOKKER 50 AIRCRAFT HAD TO RETURN TO THE ST MARTIN AIRPORT AFTER DEVELOPING AN AIRBORNE ENGINE SHUTDOWN.

THE AIRCRAFT SAFELY RETURNED TO ST MARTIN. THE MAINTENANCE DEPARTMENT OF INSEL AIR IS CURRENTLY PROCEEDING WITH AN INVESTIGATION AND WILL PROCEED WITH THE REQUIRED REPAIRS BEFORE THE AIRCRAFT IS PUT BACK IN SERVICE.

IT IS TO BE NOTED THAT THE FLIGHT CREW APPLIED CORRECTLY ALL OF THE PROCEDURES RELATED TO SUCH INCIDENT.

INSEL AIR INTERNATIONAL EXTENDS ITS SINCERE APOLOGIES FOR ANY INCONVENIENCE CAUSED TO ITS PASSENGERS.

AIRPORT PJIA – One of Inselair planes, flight 512, which was on the way to Curaçao via Sint Maarten, lost one of her engines 20 minutes into the flight.

Pilots were unable to restart the engine, so they notified Princess Juliana International Airport (PJIA) Tower that they would perform an emergency landing.

Airport and Government Fire Department along with Police and Ambulance responded to the emergency situation.

Airport spokesperson Audrey St. Luce-Jack confirmed to 721news that the Fokker flight 512 of Inselair landed safely, and all 53 passengers on board were in good health.