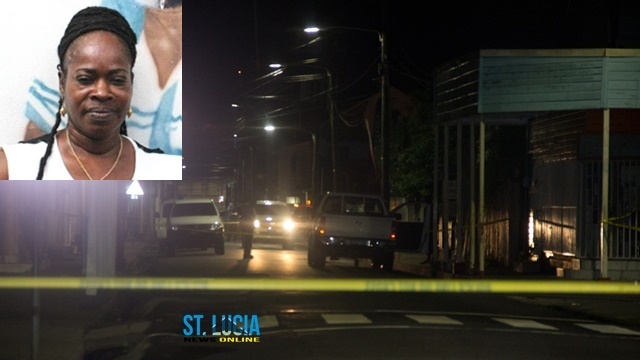 SAINT LUCIA — Palpable fear is in the city atmosphere following the fatal shooting of well-known Wilton’s Yard resident Cheryl Clarke, who was shot on Brazil Street on Thursday. She died the next day. Three months ago Clarke’s husband, BJ, was also shot to death on Chaussee Road. Yesterday several Castries residents openly admitted they are living in fear, knowing not who will be the next casualty as things “get hot in de yard.”

Cheryl Clarke, along with Peter Reynolds, headed the Wilton’s Yard Association, whose raison d’etre is to improve the image of the area once known as “The Graveyard”, home of all things evil. Between 2010 and 2013, the pair made constant visits to the STAR to discuss, among other things, the fact that they continued to be seen in a negative light by some police officers.

In 2011 the STAR spoke to Clarke and Reynolds following the fatal shooting of Arthur Clarke, Cheryl’s brother. “Regardless Arthur Clarke’s reputation,” she said, “he had become over the years a peace maker.” She claimed he had far more influence among young people than she, never mind that she was president of their association. She said he was always begging young people to stop the violence and to learn how to deal with conflict without harming one another.

Additionally: “He was one person who could have gone to any ghetto. I mean people used to come to see him, regardless of what battles and what friction were going in the different communities.”

Reynolds feared that “Arfo’s” murder would diminish their efforts at bringing peace to Wilton’s Yard, saying, “Right now I am very fearful as to what will happen as far as the crime situation is concerned, because he was really holding it down.”

Earlier this year the ghost of Arthur Clarke came back. Following the prime minister’s IMPACS address in March, Cheryl Clarke said she was convinced her brother was a victim of the extra judicial killings the prime minister had referred to.

At the time of the IMPACS address the island had not had one homicide in three months. But all of that would change a month later. Cheryl Clarke’s husband would become one of four individuals shot and killed in the first week of April. BJ Emmanuel was gunned down in Castries on Tuesday, April 7. Emmanuel, 48, originally from Bexon, Castries died on the spot after he was shot on Chaussee Road, near the Leslie Land intersection, at about 11:20 a.m.

Reliable sources told the STAR that on Thursday Cheryl Clarke was at a bar on Brazil Street, Castries playing the video lottery games. As she made her way out in the company of a female companion, she was allegedly accosted by an individual. Following an altercation, she was shot multiple times before collapsing. She died while undergoing surgery.

Following her husband’s death, Clarke sent out this message, via the local media: “I am sorry to say to Saint Lucians expecting the worst: the Almighty is not asleep. I strongly believe in Him. I think I had more than one death to realize that. With the Almighty, everything, everything will be answered. He is the only one who has the answers.”

Asher Emmanuel’s last words: “I missing you already. I going to come back as soon as I finish”