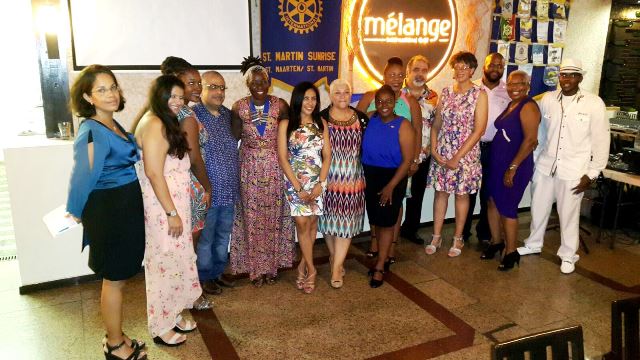 PHILIPSBURG – The Rotary Club of St. Maarten Sunrise installed new president Okama Ekpe Brook, and 13 board members at a dinner ceremony on Sunday, July 3, at the Melange International Grill Restaurant in Port-de-Plaisance.

Outgoing President Marcellia Henry highlighted in her speech the many projects accomplished during the course of the year including: Launching new community and vocational service projects; Strengthening existing ‘Signature’ projects; Reviving successful local and international projects;  Establishing new partnerships with businesses, departments of government, and other non-Rotary service clubs in the community; Participating in joint projects orchestrated by the Rotary Clubs of St. Maarten/St. Martin, St. Barths, and Anguilla, and sponsored clubs: Rotaract Club of St. Maarten Sunrise and Sundial Interact Club, and organizing more fellowships to sustain, attract and diversify membership.

She also highlighted several awards won by the Club such as 1st place for the District’s Club of the Month Program, and being named the Club of the Month Superstar, and receiving the Diamond Award and trophy. She thanked those who partnered with the club during her tenure noting that the Club moved from “Success to Significance!” She concluded with a Sunriser appreciative salute noting that to achieve such an accomplishment with only 18 members, in spite of there being 84 clubs in district 7020 varying from large (100+ members) to small (25 and less members) in 10 countries, 16 islands, is beyond impressive.

New President Brook thanked members for the trust in electing her as their President. She noted her vision is to be a catalyst for change, strengthening acquaintances, serving humanity, and being the change within the community, region and globe. In partnership with fellow Rotarians, other presidents from Anguilla, St. Barths, St. Martin Nord, Mid Isle and St. Maarten Clubs, and supporters within the community, she called on others to join Rotary in this journey “as we celebrate 100 years of the Rotary Foundation and 30 years of women in Rotary.”

She is particularly excited that all three clubs on the southern side of the island have female presidents. The Assistant Governor and both Rotaract presidents, are females. Building on the theme of District Governor Haresh Ramchandani to “Be The Change,” she pledged her commitment to do all within her capabilities, and with the support of her board and members, to ensure that the fight to eradicate polio is continued through the foundation’s work, transform lives within the community through impactful initiatives, strengthen the vibrancy of the club that the collective passion be reawakened and reinvigorate the Four Way Test with fun fellowships and “Service Above Self.”

She hopes to play a role in reducing unemployment by addressing youth issues, particularly youth at risk. She highlighted peace and conflict resolution activities to strengthen understanding and peaceful coexistence.

Public Service Announcements entitled “Rotary Champion of Peace” are gaining popularity as an educative peace building and conflict resolution tool. A second District Grant has been granted from the District 7020 funds to continue these activities in 2016.

She encouraged people to listen out and join the Rotary peace walks to create greater awareness and contribute to the peace fund. Another initiative, the “Source of Inspiration and Learning” (SOIL) Center aims to address through innovative approaches and sports, issues faced by delinquent youth in the school district of St. Peters. As a performing artist herself and sports lover, she looks forward to helping to enhance youth talents in this multicultural society.

So, thematically, Polio, culture, education and literacy, economic development, peace and conflict resolution and sports will be prioritized during the year 2016-2017.

Brook has been part of the Rotary family since her teenage years in Nigeria where her family made Rotary memorabilia. She has been a volunteer from a young age, and worked with the United Nations. She never considered joining Rotary. She even declined when asked to join in Curaçao. According to her, the conduct of humanitarian service was always an integral aspect of her life and there was no need to be part of a club to give back.

The turning point came in 2014 when she met Rotarian Angela Gordon who invited her to make a presentation on national development to Sunrisers. In the exchange that ensued, she came to understand what drives Rotarians, the passion, expertise, skills and dedication and the realization that together, “we can make a greater impact with all these talents through collective action and a vibrant club. We have a common vision, a common purpose. Let’s make it happen,” she said. So, she asked how she could assist the club and ended up joining the Rotary Peace Monument Committee. Soon after becoming familiar with Rotary, she learned that her own country Nigeria was on the verge of complete Polio eradication.

In 2014, she joined Rotary. In 2015, Nigeria was declared Polio free. She noted that now, Rotary is very close to complete Polio eradication. But Rotary has not done this alone nor will it do the rest alone. What is needed is consistent action and durable partnerships. “Imagine if we can combine all our efforts, resources and pull in more people. We will be much further and be this much closer. We are almost there. Two more countries, Afghanistan and Pakistan and the world will be Polio free! We are this close, and together, we can do it. We can eradicate polio around the world,” she noted.

In the two years that she has been in the organization, moving from Membership Director, to Secretary and now to President, she noted that her dream is of collective action that harnesses full human potential, giving of time, talent, and treasure for the good of humanity, for the progress in communities. “Together, we shall continue to be the change, serve humanity, and make the world a better place.”

She concluded by commending outgoing President Henry and her board for an excellent performance and expressed the wish and goal for the Club to continue to make a significant contribution to the community.

A special “thank you” went out to all the guests and sponsors who made the evening a success.

The Rotary Club of St. Maarten Sunrise meets every Tuesday at the Ginger Bread Café Restaurant, Belair Beach Hotel from 7:00am to 8:00am. For more information on the club visit sxmsunrise.org or email: sunriserotary.sxm@hotmail.com. Visit them also on Facebook: Rotary Club of St. Martin Sunrise. 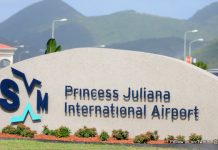