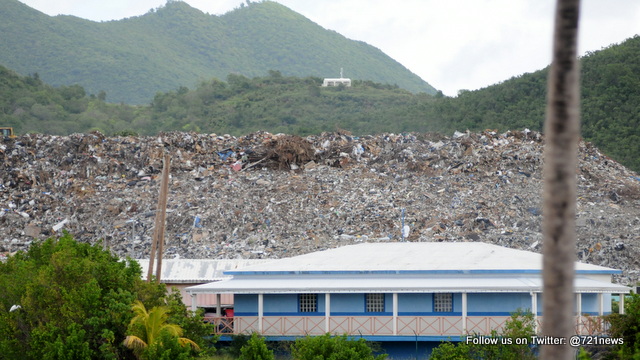 It is nine in the morning and a purple dawn is rising with difficulty in the east while a strong ice-wind is blowing over the cold North Sea to the west. It is February 2008 and I am standing with fifty of my fellow Master students at the Volgermeer Polder, a former toxic waste dump for the city of Amsterdam. In front of us two million square meters of garbage and dangerous chemicals are being transformed into a natural reserve by engineers contracted by the city of Amsterdam. My professor, Dr. Joyeeta Gupta –a Nobel Prize Laureate- lectures on the process of changing a national health hazard into a viable natural reserve.

While listening to Dr Gupta speak I couldn’t help but notice the similarities between Volgermeer and our Landfill back home on St. Maarten. The Volgermeer polder, which is approximately ten kilometers north of Amsterdam, is an area of land saturated with dykes and streams and lakes. It used to be a peat farm, the peat used to warm beautiful Amsterdam throughout its history. At about the turn of the last century the city decided to get rid of its garbage at the polder, ferrying in mass amounts of waste on garbage boats and dumping it in the lakes and bogs which dot the area. As Amsterdam grew in size so did their garbage and soon the dump spread to immense dimensions. The area was plagued by fires caused by escaping gas and the residents in the area started to complain about their health: strange infections, respitory problems and diseases caused by the lowering of their immune systems. All of this sounded eerily familiar. 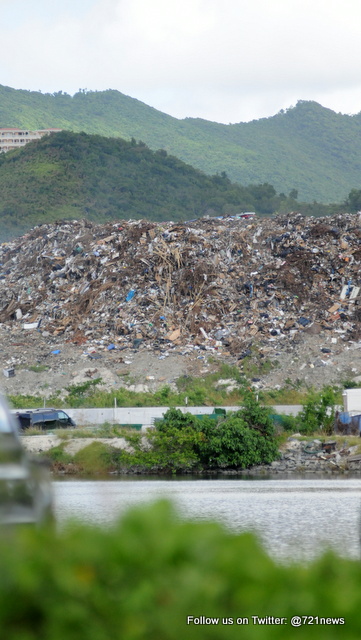 The city of Amsterdam closed the area in the eighties and sent teams of scientist to monitor and take samples of the soil and water. They soon found that dangerous chemicals that leaked into the soil and groundwater, chemicals such as Agent Orange, famous for being used in the Vietnam war, and PCBs –a pesticide that causes deformities in both animals and humans.

As we started our tour of the area a representative of the company that was involved in the project started to explain the process by which a waste dump was transformed into a nature reserve. The streams and lakes that are a part of the polder were dredged and the silt used to cover the dump to about two meters high. The city of Amsterdam also provided soil from its various building projects to cover the dump and a special layer of plastic-like organic material was placed on top, a process called natural capping. This material, which is widely used and quite inexpensive, allows for the gasses and fumes to escape while preventing further contamination to the area. On top of this layer peat moss and grasses were planted which eventually dissolved the garbage under it and in a few short years a viable ecosystem started to develop with clean water with fish and frogs and swans and ducks.

I started to think that perhaps this may be a solution for us here as well. Even with some of the advances that Sint Maarten has had regarding conservation in the last four years there are still three issues which blemish our reputation in terms of environmental protection. One is the need for a terrestrial park to protect and conserve our land-based flora and fauna; the second is the continued challenges faced by our wetlands; and the third, and this is by far the issue of most concern both for the health of our environment and that of our population, is the Dump.

With the amount of chemicals and garbage entering into our soil, wetlands and into our lungs when the dump is on fire we need to address the issue of the landfill yesterday. The heavy metals and other pollutants present on the Dump and the surrounding area are a national health hazard.  A waste-to-energy plant is good and very necessary to mine the current landfill. But why not make it better? A waste-to-energy plant combined with a complete rehabilitation of the area, including that of the Great Salt Pond, which is the reason why Sint Maarten, our Soualiga, exists in the first place. If the Pond is dredged and the silt used, if the tons of soil from all of the projects current and planned are used to realize a sustainable solution for one of the most embarrassing scars on our island, then yes we will be at the vanguard of forward green thinking in this region. For it is only when we solve the issue of a landfill in our capital and in our natural and national heritage, can we speak of sustainability.

I remember the tour being over and having to return to my tiny apartment in the city to prepare for the next day’s class. I remember how hard it was for me to focus because I couldn’t help but think how useful this would be for my home. Imagine a green park with paths and fountains and bird-watching blinds and swings for children where garbage once stank in the blazing sun and where flies and midges once made life miserable. Imagine it being the centre of the capital of a new St. Maarten; the fact that it was a dump a vague and unpleasant memory, like the memory of the taste of aloes on our sucking-thumbs as children. Imagine the Salt Pond, the cradle of our society, gently lapping at clean green shores. Imagine our grandchildren, students at our university, being lectured on how a dump was turned into a natural reserve. Imagine the lecturer, one of our children, winning the Nobel Prize for Science. Anything is possible under the Caribbean sun.

For more information on the Volgermeer Polder please visit: http://www.rnw.org/archive/transforming-chemical-dump-nature-area