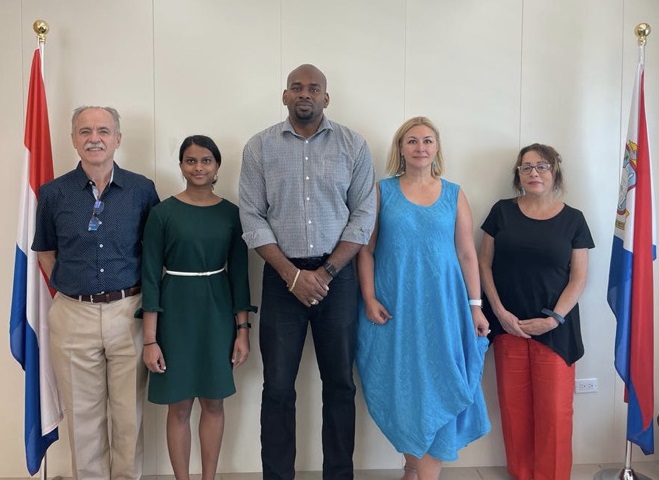 Philipsburg, St. Maarten – The minister of VSA discusses plans for the execution of activities associated with the mental health project.

Minister of Public Health, Social Development and Labor, Mr. Omar Ottley, welcomed World Bank representatives Ana Holt, Johanne Angers, Marcelo Bortman, and Alyssa Khan to his office to discuss the delegation’s trip. The group is currently here on a travel they refer to as “a mission”.  The aim of this trip is to gain perspective and insight about St. Maarten’s situation as it concerns mental health and to have discussions about moving the project along with relevant parties. This is the first mission trip for the group regarding the project.

Spokeswoman for the group during the courtesy visit to the Minister’s office, Ms. Holt, remarked that after meeting with the policy team from Public Health and mental health focal point for the ministry, manager of the project at the NRPB, and visiting various foundations on the island, the group received a better understanding of the issues the island is facing as they pertain to mental health and substance abuse. The Minister remarked, “mental health issues are indeed rampant on the island, but also substance abuse is becoming a great concern, particularly amongst our youth.” On behalf of the delegation Ms. Holt stated “after speaking with personnel of the foundations that we visited and policy makers of the Department of Public Health that I must concur with [the Minister’s] sentiments.

On the mission the delegation visited the Mental Health Foundation, the Ujima Foundation, Turning Point, White and Yellow Cross Centre, (both the Hope Estate and St. John’s Estate locations). The group said that they were impressed and inspired by the commitment and dedication of staff, both from the foundations they visited as well as the staff from the government. Ms. Holt reminded the policy team working on health reforms and legislative updates, “sometimes we do so much, and we still might not think it enough because we are looking forward to the long path we still must travel. We must remember to reflect and look behind as well from where we came”.

At the end of the courtesy visit the delegation again pledged their support and commitment to the project before posing for a picture and bidding salutations shortly after. The group looks forward to returning to the island later in the year to embark on their second mission in regard to the project.

Minister of VSA Omar Ottley expressed his profound gratitude to the delegation. “This is truly a chance for St. Maarten to strengthen our mental health awareness and increase access to mental health care. Amongst the list of technical and financial aassistance we would also like to request legislative assistance to help adjust the current laws so that we can intervene at an earlier stage, without infringing on human rights”. Ottley said