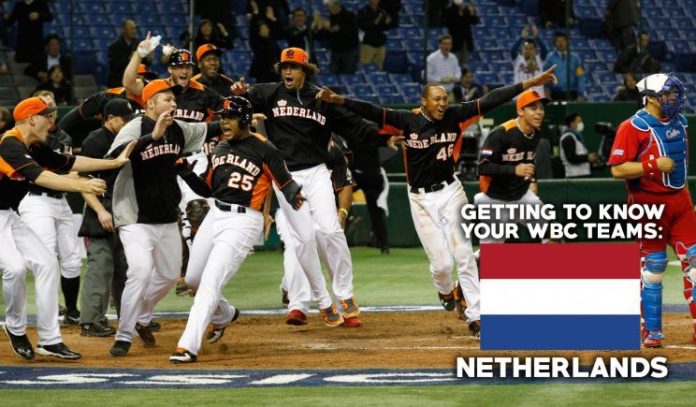 Yahoo Sports — Back in 2013, the Netherlands went to the WBC with an infield full of young players who weren’t yet well known. Xander Bogaerts, Andrelton Simmons, Jurickson Profar, and Jonathan Schoop helped their team break out, surprising everyone by making it to the semifinals and making Honkbal (the Netherlands’ highest level of professional baseball) everyone’s favorite word.

Four years later, those four players are still relatively young, but much more well-known. And they’re going back to the WBC, joined by Didi Gregorius, to see if they can make it even farther. Four years of experience has done nothing but make these guys better, especially for Bogaerts and Schoop, who both had their MLB debuts in 2013 and have gotten steadily (and fantastically) better since.

The Netherlands definitely has their infield all locked up, but pitching is the one area where they’re lacking. They have three guys with major league experience in their rotation: Jair Jurrjens, Shairon Martis, and Rick van den Hurk. However, none of them are currently pitching in the majors. Kenley Jansen would be the big name, but he won’t appear unless the team makes it past pool play and into the elimination rounds. They do have Loek van Mil, a former Minnesota Twins prospect who is 7-foot-1 (or perhaps two 3-foot-6 children standing on each other’s shoulders). He wasn’t bad in his time in the minors (3.48 ERA over nearly 400 innings), but the Netherlands is going to need all its pitchers to get hot in order to beat their showing from 2013.

Schedule details: The Netherlands plays in Pool A, and will start their tournament by playing Korea on March 7. They play Chinese Taipei on March 8 and Israel on March 9. After that? Well, that’s up to them.

’13 Finish: They went 4-4 overall in 2013, but they made it to the semi-finals after busting out of pool play with a 2-1 record. In the semis they beat Cuba two separate times, but fell to Japan in the last game of round two and were eliminated.

Notable absences: 2013 “father figure” Andruw Jones is not playing in the WBC this year.

Player you should get familiar with: Wladimir Balentien, who’s playing in right field. Balentien survived in the majors for just three years, but resurrected his career in Japan in 2011. “Resurrected” might be an understatement, actually, since in 2013 Balentien set the single-season home run record with 60 dingers.

Do they have a chance to win?: They do have a chance, but it’s incredibly slim. That infield makes it tempting to say yes, but their pitching is quite the obstacle. They could break out and surprise everyone, and they’re bound to do well early on, but once they start facing teams in the knockout rounds, it’s going to be tough to win with what they have.

THREE BIG QUESTIONS ABOUT THE NETHERLANDS
How far can their infield take them? Pretty far. Gregorius and Schoop have power, Simmons has average and Bogaerts has lots of both. But they won’t just help at the plate. They’ll help their pitching staff with their excellent defense. Simmons in particular is utterly amazing defensively, and will be a one-man show over at shortstop.