Stop interfering with veiled and not so veiled threats in the internal matters of St. Maarten. It was with much consternation that I read the article appearing in the daily newspaper “Knops is not inclined to intervene in St. Maarten”. According to the article of October 9, 2019, the State Secretary states and I quote; Dutch State Secretary of Home Affairs and Kingdom Relations Raymond Knops is not inclined to intervene in St. Maarten’s political crises end of quote. Truth is, this is all they have been doing.

And more so after the passing of hurricane “Irma”. And the tool they are using is the Dutch constitution. If it is one time I agree with Member of the Second Chamber Andre Bosman is when he said that the charter (Dutch) can go into the bin. I would prefer the word garbage instead of bin. I consider it dictatorial, undemocratic and filled with unnecessary restrictions when it comes to the Caribbean part of the Kingdom. The Dutch are collectively responsible with the then opposition for the present delays experienced as it regards the reconstruction efforts for St. Maarten. Permit me to explain why I made this statement.

Then Prime Minister William Marlin had lamented the fact that the Kingdom Government had attached conditions to the aid (which he never refused) for St. Maarten which had been devastated by the worst hurricane in 2017 that came off the coast of West Africa. Aid of which at the time we did not even know the amount or what would be a grant or a loan. The response of the Dutch government was to embark on the most slanderous, vicious and destructive campaign against him. Today we hear politicians from the other side saying William was right. Let me correct those statements, no he was not right, he is right.

The people are still waiting on their roofs to be fixed. What was their agenda; “Border control and the Integrity chamber”. Do you remember the phone conversation between Prime Minister William Marlin and Prime Minister Plasterk? PM Marlin told the Dutch Prime Minister that it is not right for the Dutch government to hold the people of St. Maarten hostage over the issue of establishing the integrity chamber controlled by the Dutch and reports to the Dutch. To which Minister Plasterk’s response was, If the conditions are not accepted then there will be no aid from the Netherlands.

I want to remind the people of St. Maarten that the Dutch were not only accusing the politicians of St. Maarten of corruption but Minister Plasterk according to reports said he did not trust the court of first instance, the general audit chamber and the Ombudsman. These were the organizations proposed by the St. Maarten government to head the Integrity Chamber. Another delay by the Dutch government was when they brought in World Bank to manage the funds knowing quite well that their procedures are tedious and time consuming. Another statement by Mr Knops, it remains to be seen whether this political situation shows a lack of integrity or a despising of the constitution separations of powers.

What does he mean by despising the constitution? (De pot verwijt de ketel). The pot telling the kettle its bottom is black. He claims that the autonomous position is not without limit? In other words, they will intervene whenever they feel like it. He cited article 43 of their constitution which definitely cannot be executed because St. Maarten is in a Political Crises not chaos. The people are the only ones to decide who manages this constitutional state called country St. Maarten and not outside forces. But the Dutch are relentless in their pursuit to control this island based on its geographical location or in the words of Prime Minister Rutte and I paraphrase although it was said in my presence. “St. Maarten is in an ideal location for trade and commerce. Once a pirate always a pirate.

Why I said that they are relentless is based on the following: October 9, 2019 daily herald front page “Knops is not inclined to intervene in St. Maarten”. October 11, 2019 daily herald front page “Knops sharp in his wording: “Active political Obstruction”. In this edition he speaks about political obstruction, corruption, self-enrichment. Does he want to sit on the seat of the Justice system? Isn’t the justice system doing its job? Is it not intervention when they state that if parliamentarians don’t reduce their salaries by 10% their will not be any liquidity assistance?

I am deeply concerned that too many of our people will lose sight of the agenda of the Dutch government which is to control this constitutional state to our demise. Remember we are talking about a Kingdom government who refuses to establish an integrity chamber. Although they have scandal after scandal?

This is a Kingdom government who refuses to establish a constitutional court because they don’t want their laws to be tested screened or scrutinized. People of St. Maarten they make all kinds of promises to which I say a promise is a comfort to a fool. They are interfering, they are meddling, they are delaying. As the old Indian saying goes, they speak with forked tongue. Don’t be fooled actions speak louder than words. 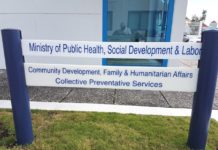