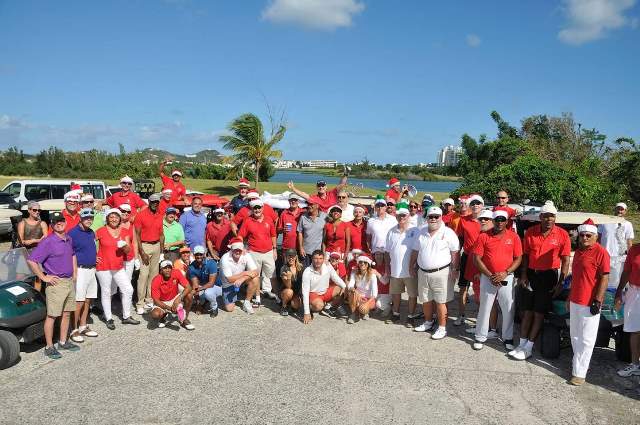 The annual Santa Scramble tournament organized by the St. Maarten Golf Association was again a tremendous success. This year this annual December event was enjoyed by 16 teams of four members each.

After a fierce battle and lots of fun the winner of this year’s Santa Scramble was the team of Haillant, Rosa, LeBlanc Morin and Dare who ended the 18 holes stroke play event with a total score of 60 low net.

Second prize was won by the team of Holmes, Zorn, Wijnhoud and Groeneveld.

Third prize was taken by the team consisting of Struthers, Hallam, De la Salle and Gurr with a score of 63 low net.

After the tournament, all players enjoyed the award ceremony and contributed generously to the silent auction items at the after party at Bar-Restaurant Barcode in Cupecoy. During this event awards were also presented to the runner up and winner for the 2018 Club Championship named the Thomas Smith Challenge Cup after long time dedicated member and founder of the SMGA, Thomas Smith. Francois Anton was runner up with Buzz Adamski the winner.

The St. Maarten Golf Association is a non-profit organization that welcomes all beginning and experienced golfers, tourists and St. Maarten / St. Martin residents alike to become members. Every month the association organizes Scramble matches, Medal Play tournaments as well as the annual St. Maarten Open in April. If you like to become a member for as little as USD 85 per year, please visit us on facebook: https://www.facebook.com/St.MaartenGolfAssociation or www.sxmgolfassociation.com